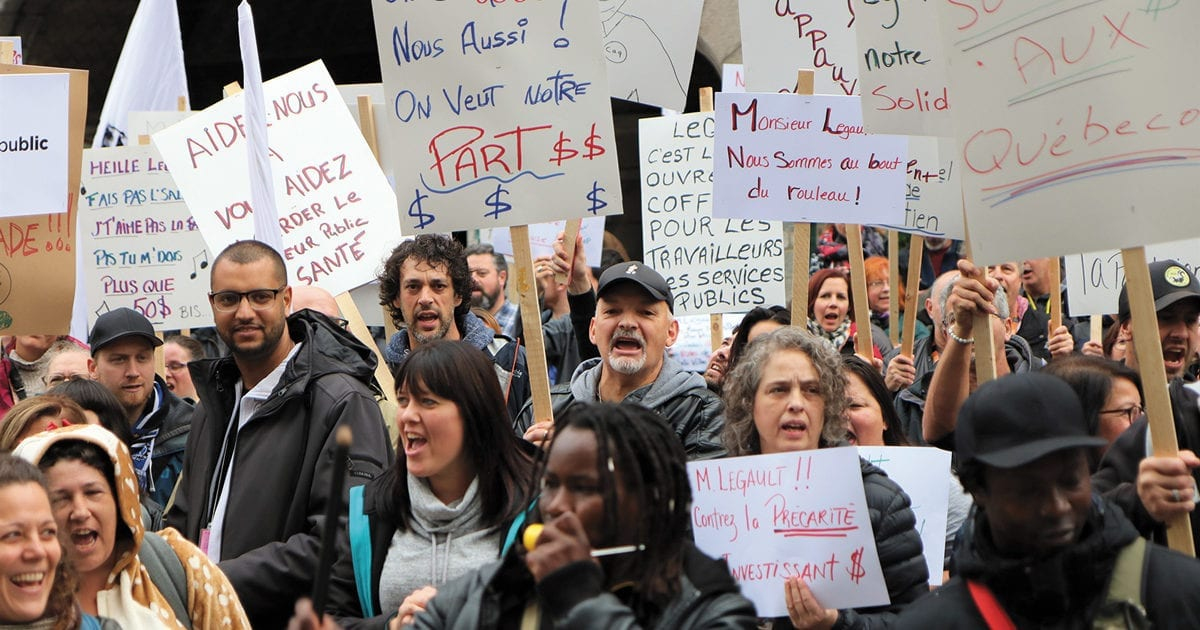 As François Legault settles into the second year of his mandate, one thing is certain – the first CAQ government in history is facing a growing opposition.

Legault isn’t yet the same steamroller as Ontario’s Doug Ford or Alberta’s Jason Kenny. The CAQ enjoy budget surpluses generated by the deep public service cuts and austerity policies of the previous Liberal government. Also, the economy is doing well as a result of the weak Canadian dollar. But it would be a mistake to believe that the government will invest in education or health. One of their first actions was to cap the school tax at the lowest rate in the province. As a result, school boards (or what will remain of them after Bill 40 is passed) will have to cover a $900 million funding shortfall. Legault will soon have succeeded in squandering the budget surplus through tax gifts, without improving living conditions of millions of Quebecers. Quite a feat!

CAQ against minorities and immigrants

This is a government of manipulators and opportunists. A key part of the resistance is mobilizing against the laws and other discriminatory measures that target immigrants, Muslim women, and refugees.

The CAQ goes well beyond the Liberals in exploiting identity issues to increase support. Any opposition to Bill 21, the “secularism law,” becomes an “anti-Quebec” attack; if the criticism comes from outside Quebec, it is immediately equated with Quebec-bashing. When Muslim women, the people most affected, oppose the law the government says that “immigrants” and “Islamists” are “rejecting Quebec.” Unions that protect their members from discrimination are labelled “Islamo-collabo” unions. This is CAQ’s sectarian nationalism.

In this, the CAQ can count on the unwavering support of the Parti Québécois, which is always ready to elbow unions into derailing any mobilization against Bill 21. This increasingly moribund party seems convinced that, by supporting discriminatory laws against minorities, it will see a rebound in sovereigntist zeal. Based on this calculation the PQ has unconditionally supported Bill 21, including the motion of closure to cut off debate, even though it contravenes the Charter of Rights.

Immigration control is another CAQ fad. From reducing the number of immigrants and cancelling 18,000 pending cases, to reforming the PEQ (the Quebec Experience Program, which provides students and work permit holders with a path to permanent residency), Minister of Immigration Jolin-Barette has continually promoted botched policies. But this has placed him out of step with employers, prompting Legault to rein him in. Jolin-Barette now champions an increase in “economic class” immigration, at the expense of refugees. It shows who really runs things.

As of 2020, immigrants will have to pass a test on their knowledge of Quebec values. But immigration law experts feel the test will be of only symbolic value, since people who fail can retake it and will not be deported. According to Patrick Taillon, law professor at Laval University, this is all calculated to win votes: “You could say that the government has mainly sought to win over an electorate worried about the effect immigration has on transforming society, and that it wanted to campaign on the backs of immigrants.”

CAQ against the working class

CAQ drew sharp opposition when it deregulated the taxi industry. The previous Liberal government had already ceded the market to Uber, turning a blind eye to the illegally operating multinational. As a result, permit prices plummeted and thousands of working families lost lots of money. The CAQ affirmed all of this with Bill 17, deregulating the industry and handing the taxi market to Uber on a silver platter. The government is offering taxi drivers $500 million in financial compensation, while the drivers are demanding $1.5 billion to fully reimburse the cost of permits.

CAQ’s anti-labour prejudice is felt in other sectors. At the ABI aluminum smelter, workers who had been locked out for months by the employer were hit by direct intervention from the premier, who encouraged the multinational to maintain a hard line against them.

In September, workers at SÉPAQ (the agency managing Quebec’s parks and wildlife reserves) rejected a tentative agreement in July that suspended their move to strike, just before the strategic construction holiday. The workers, some of whom are paid little more than minimum wage, demand decent wages but the agreement provided increases of only 5% over 5 years and did not even cover inflation. It is very clear that the government has adopted a hard line against public sector employees.

The CAQ does not bother to hide its pro-employer bias. At the beginning of June, the opposition pressured the government to act against valve manufacturer Velan’s plan to relocate production from its Montreal plant to India. Legault retorted that transferring the 130 jobs abroad was a good thing and accused Québec Solidaire spokesperson of being “communist” because she dared to criticize the move.

During the 2019 strike by CN rail workers, the CAQ demanded that the federal government legislate the union back to work. Legault used as an excuse the pending “state of emergency” due to propane shortages, a crisis which had been deliberately manufactured by CN in order to bring pressure against the strike.

The Québec Solidaire and Liberal opposition parties can do little against the CAQ in the National Assembly, where it holds a majority. Rotating taxi strikes and the anti-racist protests have put pressure on the government, but not enough to force it to back down. Aggrieved teachers and taxi drivers have turned to the courts.

Despite being almost universally opposed – including by commercial and industrial associations, consumer defense groups and opposition parties – the CAQ passed Bill 34 on electricity tariffs, again by invoking closure. This law followed a report by the Auditor General showing Hydro-Quebec had pocketed more than $1.7 billion in overpayments since 2005. The bill freezes rates for 2020 and reimburses only $500 million of the overpayments. But it also removes the power to set electricity prices from the Régie de l’énergie – which had maintained lower-than-inflation prices increases for the past 10 years – and raises them automatically with inflation. In the process, the government and Hydro-Quebec will grab hundreds of millions of additional dollars from consumers.

The CAQ was tempted to similarly force through Bill 40, abolishing school boards, but ultimately changed its mind. The bill involves important constitutional issues and is being challenged on all sides, particularly by teachers’ unions. The practice of electing trustees will be ended in the French-speaking boards but maintained for English-speaking boards, who have expressed from the outset their intention to not respect the law and to contest its constitutionality. This makes the bill completely discriminatory. School boards will be replaced by administrative councils made up of volunteers selected by their peers. This ultimately centralizes more decision-making power in the hands of the Minister of Education.

Michel C. Auger of Radio-Canada has noted that over the past year the CAQ government has been trying to concentrate power as much as possible in its hands, by eliminating outside opinions and institutions that can act as checks and balances. Bills 34 and 40 are prime examples. The same is true of the Green Fund, which was reorganized in 2016 under a new management board because of its lack of direction and poor performance. But the CAQ replaced the Green Fund with the Electrification and Climate Change Fund and abolished the management board, leaving the new Fund under the direct control of the Minister.

CAQ, the environment and Indigenous nations

On September 27, 2019 climate demonstrations took place in several cities across Quebec, including a half million people who gathered in Montreal. It demonstrated Quebecers’ concern about this issue and had a decisive impact on the federal election. It seems a paradox, then, that a year earlier the CAQ could be elected when it had absolutely nothing to offer on the issue of the environment. François Legault calls himself “pragmatic,” his way of passing off economic projects as “green” projects. This is the case with the “Third Link” between Lévis and Quebec, as well as the CAQ-supported Saguenay (LNG) natural gas pipeline and liquefaction plant project. Under the pretext of defending provincial powers against federal intrusion, Legault supported the Conservative governments of Ontario and Saskatchewan against the federal carbon tax, including by intervening before the Supreme Court. There are bound to be significant confrontations around the environment in the future.

The CAQ shows a similar lack of concern towards Indigenous nations. Barely two months after being elected, they ended the Apuiat wind farm project in Côte-Nord. Through the project, the Innu nation hoped to develop its economic autonomy by creating several hundred jobs. According to Legault, however, the project was not profitable … for Hydro-Quebec.

The government took the same approach with respect to federal law C-92. The law is considered a major advance by Indigenous peoples across the country, confirming their rights and jurisdiction over child and family services. However, the CAQ challenged the constitutionality of the law, alleging that it infringed on the provinces’ jurisdiction in matters of social services and youth protection.

This completely negates the right of Indigenous people to self-determination. Indigenous leaders from across the country, including Chief Ghislain Picard of the Assembly of First Nations Quebec-Labrador (AFNQL), protested against the Legault government and reminded it of the recommendations the Truth and Reconciliation Commission (TRC) and the Viens commission, which encourage the care of Indigenous children by their own community.

2020: A stronger second round of resistance

The court challenge to Bill 21 will be one of the most sensitive issues in Quebec this year. It emerged during the federal election campaign, to the advantage of the Bloc Québécois. Defenders of the law have dug in and are attacking the court challenges process. They have particularly focused on Chief Justice Nicole Duval Hesler, who they claim is biased against Bill 21 and should recuse herself from the case. Defenders of the law know it is discriminatory – the use of the notwithstanding clause is an admission of this – and could be overturned by the court.

This question largely explains the CAQ’s high level of popularity, despite its increasing attacks against the working class. History is filled with examples of governments that openly attack minorities in order to deceive and better attack the majority. Opponents of Bill 21 should not rely only on a court challenge – the anti-racist and feminist movements, along with the labour movement, must organize and be visible everywhere in Quebec. Ultimately, it is the strength of mobilization in the streets that will be decisive.

Faced with the CAQ, we must build a solid and organized opposition. Soon this government will use the question of identity, in all manner of ways, to subdue its opponents. With the public sector negotiations that have started, which promise to be difficult, it is crucial to maintain unity. We salute those who stood up to the Legault government in 2019 and prepare for an even stronger second round in 2020.