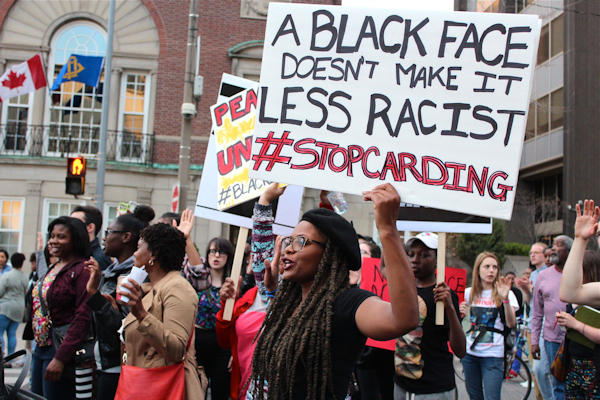 Perhaps after an election where Justin Trudeau was exposed for having worn blackface on several occasions and yet not only was not forced to resign as Liberal leader but was ultimately re-elected as Prime Minster (albeit with a minority) it should not come as a surprise that “49 per cent of Canadians don’t think racism is a serious problem in the country.”

This according to an Ipsos poll released December 21 that also found 44 per cent disagreed with the firing of Don Cherry and 40 per cent think “white Canadians are under threat from immigration.”

The same week that nearly half of Canadians patted themselves on the back – and, no doubt, embraced the illusion that they are more socially evolved than Americans – saw an Indigenous Winnipeg couple told they ‘look like’ thieves and asked to leave Winnipeg craft store, a woman in Nova Scotia talked of being subjected to racist remarks in a Tim Hortons and of how “Being brown is definitely a burden in a small, mostly white rural town,” and the RCMP was revealed to have talked of “sterilizing the site,” referring to the planned arrests Indigenous protesters in Wet’suwet’en late last year as if they were vermin.

None of this is at all unusual.

A report in Ontario in 2017 found “the constant and unwarranted scrutiny of store clerks, police and public servants leaves many racialized and Indigenous people in Ontario feeling mistrustful and unsafe, according to a new report from the Ontario Human Rights Commission.” It concludes that “racial profiling is a daily reality that damages communities and undermines trust in public institutions.”

Earlier in December an Indigenous man in Winnipeg said that he was racially profiled after several shopping trips at a Winnipeg grocery store which led a former Superstore security guard to come forward and reveal that “9 times out of 10 the shoppers that employees ask security to monitor are Indigenous.”

Despite the overwhelming evidence that this study provided, just like Canadians generally the Montreal police were in total denial. Police spokesman Andre Durocher, when asked whether police engage in racial profiling, replied, “No.”

In March of 2019 a report on racial profiling by Halifax-area police found “black people were street checked at a rate six times higher than white people in Halifax. The independent report found that in Halifax, the odds of being stopped for a street check were highest for black men, followed by Arab males and black females.”

In December 2018 the Ontario Human Rights Commission released a report that showed, “Between 2013 and 2017, a Black person was nearly 20 times more likely than a White person to be involved in a fatal shooting by the Toronto Police. Despite representing only 8.8% of Toronto’s population, Black people made up approximately 30% of police use-of-force cases that resulted in serious injury or death, 60% of deadly encounters with Toronto Police, and 70% of fatal police shootings.”

It revealed “serious use of force in interactions where there was a lack of legal basis for police stops and/or detentions of Black civilians in the first place, and inappropriate or unjustified searches of Black civilians,” and that despite “repeated claims by Toronto police of changes and improvements in interactions with Black communities, the picture is not much different when information from this period is compared to 2000-2006.”

All of this is just the tip of the iceberg with countless other studies and investigations having revealed the same issues with deep, abiding systemic racism and colonialism across the country.

This is not news, of course, to activists and community members. Lindell Smith, a Black City Councillor in Halifax noted of the report about his city, “As a member of the African Nova Scotian community, I certainly do not need Dr. Wortley’s report to tell me that for decades the community has felt that there is anti-black bias, and racial profiling when policing black communities.”

Earlier in December 2019 an Environics poll “found that Canadians were more likely to view racial discrimination as the attitudes and actions of individuals, not a systemic issue embedded in Canadian institutions. Two-thirds of respondents said people from all races have the same opportunities to succeed in life.”

Toronto activist and writer Desmond Cole responded by stating, “That is a fantasy… Unsurprisingly, a lot of Canadians are in denial that racism is a systemic thing.”

“That is why we are still where we are today. That’s why I have to write a book about this topic,” said Cole, who wrote the forthcoming The Skin We’re In about racism in Canada. “It’s not just a few people’s nasty or racist, bigoted opinions. It’s not just Don Cherry spouting off on Coach’s Corner. It’s us not getting jobs. It’s us being kicked out of the education system. It’s us being disproportionately the victims of violence. Until that stops, do all the studies we want to. Those are the real issues.”

“Before you can tackle a problem, you need to recognize it exists,” Alain Babineau (formerly with the RCMP and now with the Center for Research-Action on Race Relations) said of the refusal of Montreal police to admit that racial profiling by the force actually occurred.

This lack of recognition of the devastating and violent reality of systemic racism in Canada, unfortunately, extends far beyond just the police. And that is profoundly troubling and disturbing.