Precarious work has always been a feature of capitalism. In 16th century England, the process of enclosure forced small farmers to migrate to urban areas in search of work as wage-labourers. The 18th century British philosopher Richard Price wrote of this new working class, “From little occupiers of land, they are reduced to the state of day-labourers and hirelings; and, at the same time, their subsistence in that state has become more difficult.”

More recently, technological and economic developments have brought sweeping changes to the character of work. Precarious employment has grown rapidly and, unlike previous eras, is now a feature of virtually every economic sector and strata of the working class. The rise of the gig, or platform, economy has accelerated the growth of temporary and occasional employment. These changes are among the most challenging factors affecting workers’ ability to organize and struggle collectively.

In Toronto, union organizing among food delivery workers has captured the attention of businesses and workers alike, and projects a bold new vision for labour’s response to the current challenges of precarity.

The workers are employed by global food delivery giant Foodora. The company boasts operations in 15 countries, covering nearly 300 cities with deliveries from over 36,000 restaurants. It claims to have over 22,000 bike couriers working for it.

Foodora’s business model is based on a digital app (or platform) that customers, restaurants and couriers use to connect. The company categorizes the couriers as independent contractors instead of employees, and avoids paying Employment Insurance or other benefits, apart from provincial workplace compensation premiums (WSIB).

This precarious, platform-based employment creates an inside-out version of what we expect a work relationship to be. Virtually all of the risks associated with flexibility are borne by the courier, through unpredictable hours and earnings, absence of safety measures, or lack of training. Couriers provide their own transportation – the majority use bikes but there are others who use vehicles – and pay for their own maintenance, insurance, gas, and traffic tickets.

While Foodora claims that the average hourly wage for its Toronto couriers is $21, the reality is they are paid $4.50 per delivery and $1 per kilometre to drop it off. There are no health, retirement or disability benefits – particularly problematic given that injuries on the job are very common.

If couriers really were independent contractors, as Foodora claims, they would be able to increase their rates to help cover all these additional costs. The fact that they cannot do this is a clear indication that they are dependent on the company – regardless of the vocabulary Foodora chooses to use, the fact of their status as employees cannot be changed. 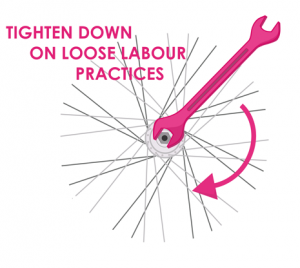 With all this mistreatment, it isn’t surprising that people began to talk union. What is surprising is how they did it.

In the absence of a common physical workplace, people needed to come together through different channels. As platform-based workers, it is suitably ironic that they did so through an online app. “The effort started on Facebook,” says Thomas McKechnie, a Foodora courier who became involved with the organizing campaign very early on, “through a courier who had previous work experience as a union organizer.” Following a series of posts on couriers’ social media groups and networking at social events like bike courier races, a core group began to meet during the summer of 2018 in a Toronto park to discuss shared workplace grievances. “There had been lots of kvetching sessions among couriers, but this one was different because we talked about what we could do to organize for change. Pretty soon, we started signing union cards.”

After limited progress with a first union, which pulled out of the effort, the group approached the Canadian Union of Postal Workers (CUPW) who quickly sent organizer Liisa Schofield to work with them. McKechnie says this was a turning point. “With the resources and guidance of CUPW, we started making much bigger strides.”

Schofield explains that CUPW received a mandate from its membership, over the past two conventions, to put resources into organizing. “The union constitution does talk about the importance of organizing and there’s an acknowledgement that public postal is under attack by the rise of these private delivery companies, so the members voted to invest in organizing.”

A strategic intervention in a shifting economy

McKechnie stresses that the Foodora drive is specifically about the precarious gig economy. “It’s not about organizing just for organizing’s sake but is part of a strategic intervention by the union in an economy that is shifting.” Schofield agrees. “The direction delivery is going is towards app-based contractors and self-employed folks. It’s the union’s responsibility to put a stop to this and to bring up the floor for all workers.”

One of the biggest challenges to organizing is the fact that the courier workforce is atomized and isolated, without the strong shared identity of traditional workplaces.

At the same time, McKechnie notes, there is a long tradition of solidarity and mutual aid within the courier community, which helps to build the links needed for a union drive. “Things like stolen bike networks and bike courier races are really important.” The union organizers have built on this by organizing workshops of interest to couriers. “How to file taxes, how to do bike maintenance, how to dress for winter, how to fight parking tickets. These are all strategically useful for networking, but they are also definitely within the mandate we’ve set for this effort, of improving working conditions and safety.”

Still, with no central worksite there are no formal and regular ways in which workers congregate, so even identifying who the workers are is a huge problem. “The entire city is the shop floor,” says Schofield, “so the restaurants became the sites where we would go to find people. All our outreach was street-based, followed up by phone calls. As we signed people up, one by one, we would map out small networks of couriers and follow up on them. These networks might be based on individual friendships, or maybe on a shared cultural background.”

One advantage of this process is that it actively engages a large number of workers in the work of organizing. By comparison, organizing efforts in traditional workplaces can be a far more passive experience for many workers. Says Schofield, “In this effort, we needed tonnes and tonnes of people, so everyone had to be an organizer.” With CUPW support and resources, couriers themselves developed the campaign, right down to the outreach pitch, through trial and error. “It’s not a case of the union showing up and taking over. This is one hundred percent courier-led.”

Based on this strategy, they made incredible progress. “We started with CUPW just at the end of 2018,” recalls McKechnie, and they filed to certify hundreds of couriers this summer.

Currently, the certification is before the Ontario Labour Relations Board (OLRB), where Foodora is disputing the couriers’ right to organize. It’s a relatively high-turnover workplace, so in addition to trying to quash the drive outright, the employer will probably want to drag the process out until most of the workers involved in the organizing drive have left.

The key to this, according to McKechnie and Schofield, is to respond by continuous organizing. “We didn’t organize to get people to sign enough cards and then stop,” clarifies Schofield. “We’re setting up the structure of the local, regardless of what comes out of the OLRB. Any new hires have mostly been contacted and informed that they are members of a union and how to get involved.” The union has set up a network of stewards and is continuing to organize workshops.

McKechnie sees this as a challenge that gets resolved through struggle. “The OLRB is never going to give us workers’ rights – we are going to take them.”

One thing is very clear: Foodsters United is delivering a tasty recipe for labour’s future.