November and December mark important dates in the fight for gender equity. The 16 Days of Activism against Gender-Based Violence is an annual international campaign held between November 25 – The International Day for the Elimination of Violence against Women (1993) and December 10 – International Human Rights Day (1948). In Canada, it includes December 6 – the National Day of Remembrance and Action on Violence Against Women which was declared by Parliament after the horrific murders of thirteen women at the Ecole Polytechnique in Montreal in 1989. These 16 Days of Activism should immediately be expanded to 21 to include November 20 – the Transgender Day of Remembrance – which has been observed annually since 1999 to memorialize those who have been murdered as a result of transphobia. The labour movement historically has played a role in coordinating actions associated with these dates, but it seems they have contracted out this crucial role to civil society groups. As a result, the impact of organizing a strong coordinated labour fightback has once again been diminished by inaction. The statistics, however, prove that a comprehensive fightback on gender-based violence is needed today, more than ever.

One horrendous example of why we must step up the campaign against gender-based violence happened just this month. Three-year-old Hunter Haze Straight-Smith was brutally murdered by his mother’s former boyfriend. This is one gruesome reality of gender-based violence – men who target a mother’s child as the ultimate pay-back. The fears of many women were heightened by this tragedy – those who remain in abusive relationships because their partners threaten to harm their children.

The inclusion of the transgender day of remembrance in the ‘Days of Activism’ is essential to raise awareness of the increased attacks on trans women over the past twenty years. Just this past summer, the American Medical Association declared that violent attacks on trans women are “an epidemic of violence.” Trans women are more likely to be victims of gender-based violence, and at the same time they face more barriers to accessing social supports, including access to women’s shelters and rape crisis centres.

Toronto Public Library’s recent decision to allow a transphobic lecture to proceed led directly to an increase of death threats against the organizers of the counter protest. Poet and trans activist Gwen Benaway led that protest and ended up locked in Palmerston Library by the police. That morning, Benaway had been notified that she had won the Governor-General’s award for poetry for her collection Holy Wild. Author/activist Alicia Elliott captured the irony: 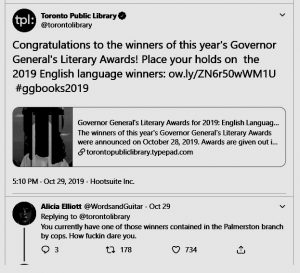 Last year’s UN report revealed that out of 87,000 women who were murdered around the world in 2017, 58% of them were killed by family members or partners. In addition, 49 of the world’s 195 countries have no laws prohibiting domestic violence, and the number of deaths from gender-based violence is on the rise. More statistics from the UN paint an overwhelmingly desperate picture of women’s oppression around the world as victims of gender-based violence:

The picture of gender-based violence in Canada reflects our history of colonization. According to the Native Women’s Association of Canada, there are more than 4000 murdered and missing Indigenous women and girls. It has been estimated that more than half of the victims of human sex trafficking are Indigenous women and girls. Statistics Canada reports that Indigenous women and girls are three times more likely to be victimized by violence, including intimate partner violence and violent crime, and approximately six times higher to be a victim of female homicide.  Labour needs to include the fight for the implementation of the recommendations of the Missing and Murder Indigenous Women Task Force and the Truth and Reconciliation Commission in their action plans.

In recent years, campaigns such as #MeToo, #TimesUp, #Niunamenos, #NotOneMore and #BalanceTonPorc have raised awareness of gender-based violence. These campaigns, however, have little or no impact on the majority of working-class women struggling to make ends meet in the age of austerity. Increased awareness needs to be matched with fighting for organizing rights and strong collective agreements. Labour should lead this fight.

Internationally, labour has had a major victory at the policy level. On June 21, the International Labour Organization celebrated the historic adoption of an international law on violence and harassment in the world of work. ILO Convention No. 190 and its accompanying Recommendation No. 206 affirms everyone’s right to a world of work free of violence and harassment. Unions around the world are now gearing up to have their governments pass the convention. Uruguay hopes to be the first country to do so. While the convention is a step forward for international recognition of the importance of fighting gender-based workplace violence, much more needs to be done at the local level to ensure labour laws are changed to favour organizing workers into unions.

Gender-based violence is an integral part of capitalist society. Every day, gender oppression reinforces working class inequalities. In order to improve the lives of those who are oppressed, labour must step up their fight for gender equality. First, though, they need to ensure that their organizations are not replicating the systemic oppression and that unions themselves are workplaces free from violence and harassment. Organizing workers into unions would be a good second step, starting with those who are most vulnerable to gender-based violence.