Think of academic work and you probably have an image of a professor, snuggled in a cardigan in a charmingly cluttered office enjoying a glass of brandy while pontificating through a well-paid tenured position and into a lucrative pension.

Think of precariously employed workers and you probably have the image of a young person slogging it out in a non-unionized, non-professional job that pays minimum wage.

Both images are very misleading.

The trend toward increasing precarity in work has infected virtually all sectors of the economy and affects all strata of the working class – from minimum waged to well-paid, from young worker to working senior, from unskilled positions to highly specialized ones. One area that has undergone a drastic shift towards precarity is academic work.

Past president of the Canadian Association of University Teachers (CAUT) James Compton noted in 2017 that contract academic staff “are paid a fraction of the salaries of their regular academic staff colleagues, they work mostly on short-term teaching-only contracts, and struggle to maintain a research profile while putting in extremely long hours. And their numbers are growing…In Canada the data on university contract academic staff is poor, but we know their ranks are swelling. And in the college system the numbers are even higher. There are no languid conversations over cigars and brandy in the faculty lounge for them. They are too busy and anxious.” 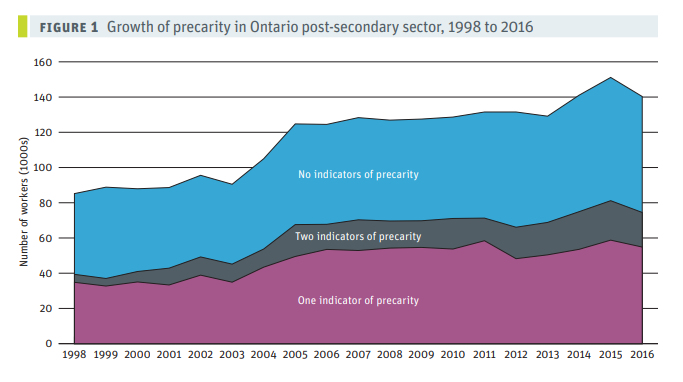 In 2018, the Canadian Centre for Policy Alternatives (CCPA) conducted a study of academic work in Ontario. It found that the number of precariously employed academic workers in the province has doubled over the last 20 years; currently 53% of post-secondary workers are in this position. In addition to increasing proportion of temporary and contract positions in virtually all job categories, the report noted that jobs with high rates of precarity (especially research assistants and teaching assistants) have dramatically risen in number while those with less precarity (such as librarians) have decreased.

Stuart Ryan is a retired union representative with CUPE 4600, representing teaching assistants and contract faculty at Carleton University in Ottawa. He notes that 70% of first-year courses at the university are taught by contract sessional lecturers. “Sessional lecturing used to be seen as a stepping-stone to full-time academic employment. But as the university cut back on full-time positions, sessional lecturing became a career for a huge number of academic workers. And it’s a career rooted in precarity.”

Ryan says that it is not uncommon to find contract instructors who have to work at multiple institutions in order to make ends meet. “They’re sometimes referred to as ‘Roads Scholars.’ I know people who travel back and forth between Kingston and Ottawa all through the week, working contract positions in both locations.”

Universities and employment websites routinely exaggerate TA earnings, by calculating an average hourly rate and then applying that to full-time hours. In fact, the pay is low – very low. At Carleton, according to the CUPE 4600 contract, a TA working a regular position for the full academic session made $10,843 last year; their counterparts at York University, with one of the strongest contracts in the sector, made just over $15,000.

Sessional lecturer and contract faculty rates are not much better. At York they earn less than $18,000 per academic session, and at Carleton just under $15,000.

A special factor influencing precarity in academic work is the way that many of the jobs are structured and perceived. Teaching assistant positions, or TAships, are typically offered to graduate students in master’s or PhD programs and are connected to their studies. The university generally views a TAship as a form of scholarship, while the TA invariably views it as a job. Research assistant positions are often divided between those that are related to a student’s area of study and those that are not, with the former typically considered academic and the latter categorized as administrative or program support. Furthermore, employers segregate research assistants whose work is funded out of university budgets from those whose work is funded by external grants. Such divisions and nuances tend to blur the lines of labour relations. Chantelle Spicer, a graduate student at Simon Fraser University and a TA active in the Teaching Support Staff Union (TSSU), says that the universities have pushed this “arbitrary divide” precisely to weaken workers and unions.

The combined academic and employment elements have a negative impact on the individual worker. Spicer notes, “I often have to prioritize my work as a TA to get grading done and respond to student need, while pushing aside my own graduate research and class requirements. Recent trends in higher education show that universities are increasingly relying on the teaching of adjuncts and graduate students. This means that the university is able to pay me less (as a student worker) to teach, shifting the real cost of education in many ways onto me and my experiences as a student and worker.”

Jaime Reyes, PhD student at Western University, agrees. As past president of Public Service Alliance of Canada (PSAC) Local 610, representing teaching assistants and postdoctoral associates at Western, he saw first-hand the effects of integrated academic and employment pressures among TAs. “Universities all talk increasingly about mental health on campus. But they don’t talk about the health effects on TAs of having to go to food banks because they don’t make enough money, or of worrying that their workload will prevent them from finishing their degree program before their employment contract expires.” Reyes feels that the poverty and precarity of academic work have made many students feel ashamed that they chose to pursue a graduate degree.

Precarious employment tends to reinforce and reproduce patterns of oppression, like racism and sexism, and academic work is no different. Ryan, Spicer and Reyes all note that one of the key examples of this is the treatment of international students.

As government funding to post-secondary education has fallen, the institutions have looked to international students as an easy source of lots 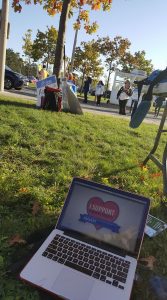 of money. These students’ tuition fees are huge, as high as $40,000 per year at some universities, and many depend on academic work. Reyes says that international students need to provide the Canadian government with proof that they have funding for their studies, so they rely heavily on TAships to provide that. “But when they arrive,” he says, “they realize that this is not funding that they receive in a lump sum, but a wage they will be paid over the session. Almost immediately, they have a financial crisis; many go straight to the food bank.”

Reyes agrees, pointing out that this is especially noticeable during bargaining. “Since international students have to demonstrate to the government that they have funding, they worry that anything that jeopardizes that funding – like a strike – also jeopardizes their status in the country.” He feels that the plight of international students represents “a layering of precarity of work and precarity of status, one that reflects the treatment of migrant workers in other sectors.”

In response to this deepening precarity, academic workers are fighting back.

First, they are organizing. On many campuses, TAs have been unionized for decades; over time, these unions have been reaching out to organize contract faculty and research assistants. Part of these campaigns is outreach to students, to build active connections with efforts to improve post-secondary education. In 2016, the Ontario Public Service Employees Union (OPSEU) organized 20,000 part-time support staff at colleges in the province, in what the union called “the largest organizing drive in Canadian history.”

In addition to organizing, academic workers are showing a willingness to strike for progressive demands. Two years ago, college faculty in Ontario struck province-wide; two of the key demands were increasing the ratio of full-time to contract faculty from 70:30 to 50:50, and increased job security for contract and part-time faculty. While the union was legislated back to work, the won significant victories against the growth of precarious work. Last year, contract instructors and TAs at York University struck against the university’s effort to minimize the conversion of contract positions to full-time and its arbitrary funding model changes that would eliminate 800 positions. That strike lasted 143 days and became the longest strike in the post-secondary sector in Canadian history.

For Spicer, this growth in organizing and militancy reflects a deepening understanding of the class nature of academic work. “Many graduate students don’t expect to join a union, because there’s a disconnect between the individual ‘life of the mind’ and collective social struggles. Yet, as people become more integrated into academic work, they recognize that the university is a corporatized industry that is guided by neoliberalism. In the process, they realize that class struggle and the life of the mind are deeply connected.”