As western aggression, led by the United States, against Iran continues to escalate, working class solidarity
becomes more urgent. People’s Voice looks at some of the background to the current drive to war, as well as some
of the dynamics in building anti-imperialist solidarity.

Here, we interview Mohammad Omidvar, international spokesperson for the Tudeh Party of Iran

PV: There is a sharp escalation in the aggression against Iran, particularly from the US government of Donald Trump. What are some of the reasons behind this escalation?

Mohammad Omidvar: It is clear that following the decision of the Trump administration in May 2018 – a decision taken despite global appeals, including by the UN – to take the USA out of the 2015 Joint Comprehensive Plan of Action (JCPOA) agreement with Iran, there was a significant increase in the tension in the Middle East as well as in the threat of a devastating new war in the region. Trump’s policy towards the Middle East and the Iran is different from that of Obama. Obama’s administration was working towards implementing their “Great Middle East Plan” and had lukewarm relations with Israel and Saudi Arabia which are well documented.  Trump’s approach to massive arms sales to the Saudi regime and expanding arms trade with the Arab governments of the Persian Gulf (part of the “America First” policy supporting these regimes’ atrocities in Yemen and elsewhere), and its close relation with the Israeli government and the support it provides for the racist and expansionists policies pursued by the Netanyahu government, form some of the key features of the new USA administration.

The imposition of severe economic sanctions by the Trump administration on our country – which most of all hurt the ordinary and already long-suffering people of Iran – and the increased US military presence in the Persian Gulf as well as recent attacks on Aramco Oil installations in Saudi Arabia has created a seriously dangerous situation in our region which could erupt into destructive military conflict.

Our Central Committee, in a statement in May, emphasized the reality that warmongers on both sides believe that war and military conflict can bring about significant financial and political benefits for them. In the United States, the bankrupt and right-wing government of Trump – currently facing the spectre of possible impeachment – and his advisers, who are preparing for the 2020 presidential election, could contemplate that a limited military engagement with the Iranian regime might have a positive effect in appeasing the sentiment of the nationalist, white-supremacist and ultra-right-wing forces of the United States that make up Trump’s main social base, thus paving the way for his re-election. Also, the regional allies of the Trump administration, including the reactionary and brutal Bin Salman regime in Saudi Arabia, US-backed states in the Persian Gulf and the racist government of Israel, are clamouring for a US military strike against Iran so as to impose their regional domination and hegemony. As has been reported many times, the Saudi government has agreed to cover the cost of such a dangerous military adventure in the region. 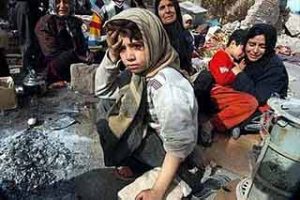 What can you tell us about the impact of the sanctions on the Iranian people? How are the people and people’s movements responding to this situation?

The economic sanctions have had a devasting impact on the lives of ordinary people in Iran. Shortages of goods, particularly medicine and also raw material and spare parts for many production outlets; the free fall of Iran’s currency against the dollar over the last year (represented by an increase from 3000 tomans to 14,000 tomans against the dollar over this period); and the destructive privatization, and anti-people economic policies of the Iranian regime, have meant that our country is experiencing a very serious crisis. Over the past year we have witnessed widespread industrial actions in the country – in particular, the Haft Tappeh Sugarcane Complex, the National Steel Industry in Ahvaz, and the HEPCO strike demanding overdue wages, better working conditions and returning these industries to public sector ownership.

It is also worth mentioning that, according to US officials, Iran’s oil production and sales have been reduced from 2.8 million barrels a day to just 700 thousand barrels a day in an economy heavily reliant on its oil revenue.

Several European countries have criticized the US for its actions, such as unilaterally withdrawing from the JCPOA nuclear agreement, but does that mean these countries are opposed to an overall imperialist policy of aggression against Iran?

It is true that the EU countries, who along with Russia and China were the other signatories to the JCPOA, disagreed with Trump’s approach to withdraw from the agreement and expressed this disagreement openly. However, we are very clear that EU countries – especially the UK, France and Germany as imperialist forces – will not have our country or people’s interests at heart and will toe the line dictated by US imperialism. The recent joint statement of the aforementioned three countries accusing Iran of organizing the attack on the Aramco facility in Saudi Arabia, in line with Mike Pompeo’s statement and without providing any proof, is a good example. Our party believes that Iran should exploit any disagreement between the US and EU to further reduce the impact of sanctions and the threat of war. The Iranian regime should not abandon JCPOA but insist and work towards forcing the US to return to the agreement.

Can you comment on the role that working-class internationalism plays in blocking the drive to war against Iran, as well as in supporting the struggle of the Iranian people within their country?

Our experience tells us that the internationalist support from the working-class movement across the world for the struggle of the Iranian people is very important indeed. The recent statement of more than 70 communist and working-class parties, including the Communist Party of Canada, had a major national and international impact and was widely welcomed by the progressives inside and outside the country.