Almost every party claims to have a workable climate plan, but what will it really take to confront the crisis? Here, we look at Canada’s carbon emissions and ask what it means to achieve a meaningful reduction. 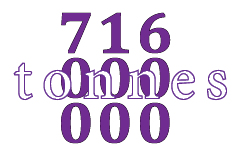 We need a more radical approach.

Where do Canada’s carbon emissions come from? 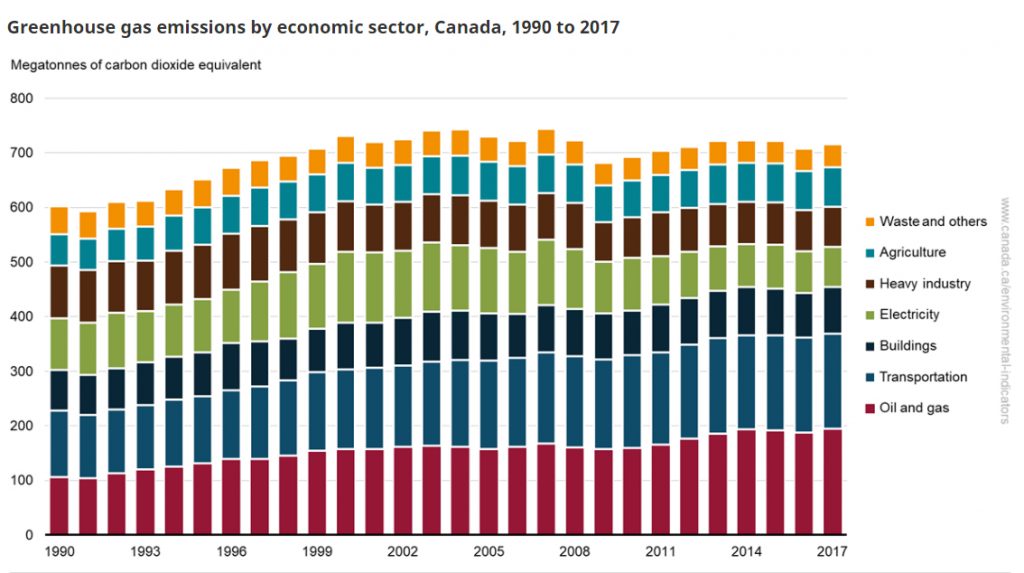 Within the oil and gas sector, natural gas counts for around 50-55 Mt and conventional oil is a relatively constant 30-35 Mt. Tar sands produce a whopping 80Mt, increasing by 33% in just five years (2012-2017) and by 86% over the decade from 2007-2017. “Downstream” emissions account for around 30 Mt; this includes emissions from refining, transportation and end-use combustion.

Phasing out the tar sands, a demand of numerous Indigenous communities, environmental groups and the Communist Party, would reduce emissions by 80 Mt. This would also result in a reduction of downstream emissions; there is less data on these, but if we assume that reducing half of the overall oil and gas production by taking out tar sands, we can confidently assume a reduction of at least 15Mt in downstream emissions.

In the transportation sector, the biggest source is passenger vehicles, cars and light trucks, at 85 Mt, followed by freight trucks at 60 Mt. Both these categories are increasing. Freight from plane/rail/marine contributes 12 Mt and passenger travel by plane, rail and bus just under 9 Mt; both these amounts have been consistent over 2 decades.

Shifting one third of the passenger vehicle traffic to mass transit should result in roughly 25 Mt of reduced emissions. However, 80% of

Canada’s population is urbanized, so we could take measures to further shift a total of half of these to mass transit and achieve an additional 10 Mt cut.

Clearly, moving the remaining passenger vehicles to electric vehicles would eliminate a corresponding proportion of the 50 Mt in emissions. If we targeted a modest 25% shift, that would eliminate just over 12 Mt.

Transferring a third of trucked freight to rail/ship/plane should result in 16 Mt fewer emissions. Moving 50% of the remaining vehicles, which account for 44 Mt, to electric would cut a further 22 Mt.

This takes us back to the downstream emissions. Since around 70% of oil is consumed as fuel for vehicles, our efforts so far to reduce passenger vehicle use by 62% means the downstream figure could come down by another 43% or 13 Mt. Furthermore, this reduction in consumption would result in a comparable reduction in natural gas and conventional oil production, resulting in an additional 36 Mt in eliminated emissions.

In the electricity sector, 57 Mt comes from coal burning generation. In 2014, Ontario completed phasing out coal burning plants – doing the same on a country-wide basis would reduce carbon emissions by 57 Mt.

Buildings account for 85 Mt, primarily from fuel combustion for heating. A conservative estimate, from the Canada Green Building Council, is that reductions of 19.4 Mt can be achieved through energy efficiency improvements in existing commercial, institutional and high-rise residential buildings. A further 7.5 Mt, minimally, can be eliminated through construction of zero carbon buildings, and another .5 Mt through retrofits and zero carbon construction for federal government buildings.

Heavy industry accounts for around 75 Mt in emissions; this includes 21 Mt through petroleum refining, which is not counted in the oil and gas sector. Measures taken so far have reduced petroleum use by 71%, so that will reduce this emission by 15 Mt.

The challenge during this election is pushing parties and candidates to support these kinds of radical measures. Implementing them requires confronting and limiting the power and reach of private corporations. Ultimately, the labour movement needs to become more decisively engaged around these kinds of demands, to provide leadership – and economic weight – to the struggle for climate justice.

We have a planet to save, and a world to win!