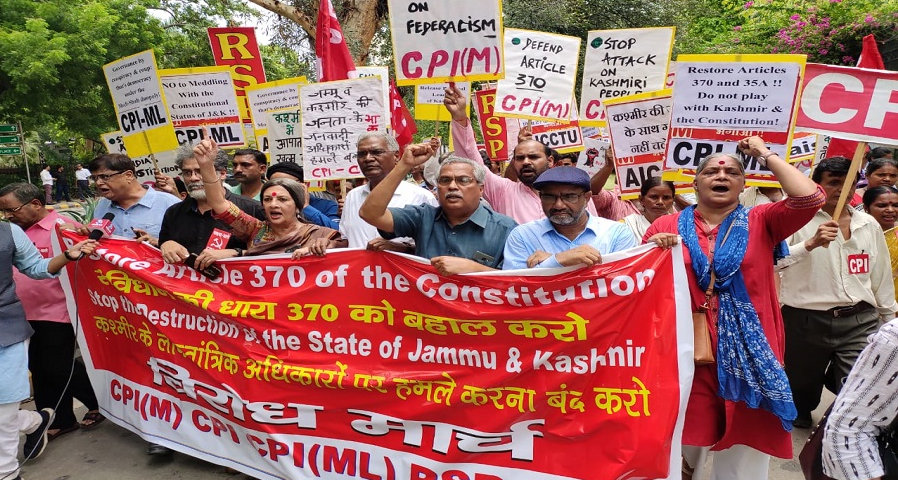 Immediately following the announcement by the Indian government of Narendra Modi that it would divide the state of Jammu and Kashmir, five of the country’s left parties issued a joint statement condemning the assault on federalism and calling for mass protests. The Communist Party of Pakistan also issued a statement, in which it expressed solidarity with the Indian left parties and warned that Modi’s legislation “has paved the way for India to transform into a fascist despotic state.”

The Indian statement – signed by the Communist Party of India, Communist Party of India (Marxist), Communist Party of India (Marxist-Leninist) Liberation, All India Forward Bloc, and Revolutionary Socialist Party – described India as being “formed on the basis of the unity of our people recognizing the immense diversities that exist, which is the legacy of our freedom struggle. Clearly, the RSS/BJP [Modi government] cannot tolerate any diversity and are converting Jammu-Kashmir and Ladakh as two separate centrally administered Union Territories.” The parties note that the legislation negates special provisions and assurances made by the Indian government to the people of Jammu and Kashmir, and that it will deepen division. They also warned that Modi represents a danger that is not confined to one region: “This is an assault on federalism, a fundamental feature of the Indian Constitution… an attack on democracy, federalism and the constitutional order.”

India’s left parties have called for mass mobilizations to oppose the assault on Jammu and Kashmir. On August 9, the leaders of the CPI and CPI(M) were detained for several hours by Indian security forces, when they tried to enter Kashmir to visit Communist politicians there. Their arrest and refusal of entry has sparked widespread international solidarity.

The government of China, who shares a long border with Kashmir, called for India and Pakistan to reduce tensions and avoid unilateral action. “The Kashmir issue should be resolved properly through peaceful means in accordance with the UN Charter, relevant Security Council resolutions and bilateral agreement,” said a Chinese representative to the United Nations.

The CP of Pakistan said that the ongoing struggle of the people of Kashmir is being “hijacked by international actors and local fundamentalists…making it into a proxy war of Pakistan against India.” The Party warned that the moves by the Modi government “will trigger the escalation of religious fanaticism, terrorism and jingoism in the region.” Appealing for active solidarity from the peace-loving forces of the world and region, the CPP called on India and Pakistan to “let the people of Kashmir exercise their right to self-determination.”

With files from Solidnet.org