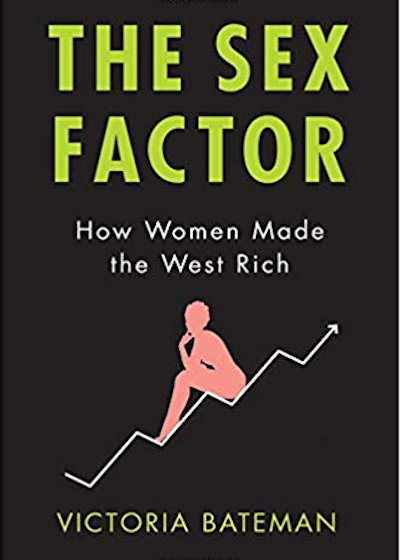 British economist and activist Victoria Bateman is known for unorthodox tactics to get her point across at staid academic conferences. Her latest book is well worth reading to gain insight into the persistent problems of income and wealth inequality for women in modern capitalist societies.

Some readers (including this reviewer) will think that Bateman’s views towards Marxist analyses of the origin of women’s inequality is less than accurate, but by using a wide-angle historical lens, the author offers a valuable perspective which is rarely even mentioned in contemporary bourgeois academia or the mass corporate media.

Bateman’s fundamental argument is that societies which encourage the participation of women in the public realm of economic and political life tend to expand their economies much more quickly than those which put more restrictions on the role of women by pushing them back into the domestic sphere. That point is widely accepted as true, but Bateman goes further by examining why, even in capitalist countries with expanding economies, high percentages of women remain stuck in poverty and struggling against rising levels of income inequality.

The author provides fascinating details to back up her statement that one critical reason for this puzzle is that women face too little control over their own bodies, both in the “modern” capitalist west and in countries which are historically closer to their feudal and agriculture-based origins. At a time when the furious misogynist backlash against women’s equality gains of recent decades (especially reproductive rights) appears to be gaining momentum in North America, this section of Bateman’s book is particularly relevant.

Unfortunately, “The Sex Factor” pays scant attention to a related point: the fact that the right-wing, fundamentalist attack against women’s equality began to gain traction after the overthrow of socialist governments in east-central Europe and the USSR. The restoration of capitalism in these societies included a massive rollback of equality gains achieved under socialism, although this historic tragedy is largely ignored by most liberal and social-democratic voices in the imperialist countries today. (For more on this, see Why Women Have Better Sex Under Socialism, And Other Arguments For Economic Independence, by Kristen R. Ghodsee, Vintage, 2018.)

Bateman is fiercely critical of mainstream economists, arguing (correctly) throughout her book that this field of study is utterly wrong to consider itself “gender neutral.” On the contrary, as she makes clear, by failing to put the question of women’s inequality as a top consideration, most economists actually contribute to the ongoing realities of patriarchal oppression.

The author skips very lightly over the pioneering work by Marx and particularly Engels on the origins of women’s oppression, but she does recognize the significant contributions of contemporary Marxist feminist writers (Silvia Federici, Emma Dowling). However, her approach to the solutions is not based on a class, socialist analysis.

She does make a powerful case that governments must prioritize a wide range of policy options to advance gender equality. As Bateman writes, “The world of work can no longer operate on the assumption that we all have someone at home to press our suits, do the dishes and look after the kids whilst we stay at our desk and work late,” and she rightly condemns “the companies whose profits have been built… on the women who have given birth to the workforce and who have spent years turning out their partners clean, tidy and well-fed every day.”

“The Sex Factor” has theoretical limitations, but this is a useful and important book.