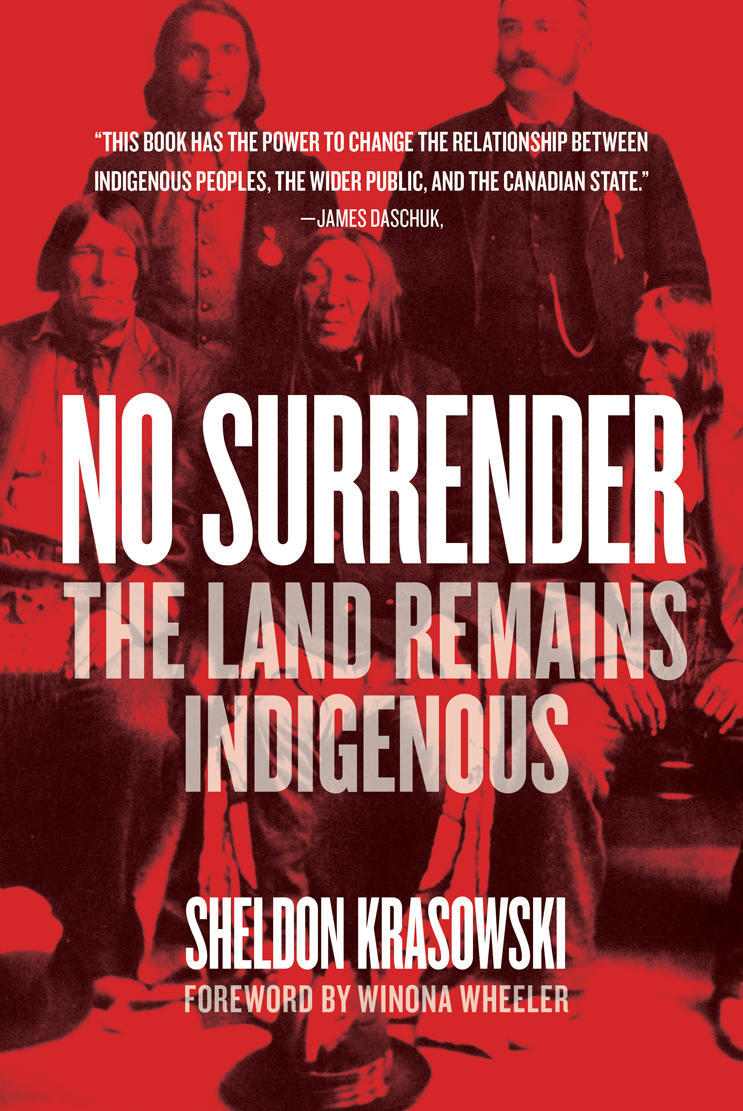 A growing number of ground-breaking academic publications in recent years are giving important new insights into the true character of Canadian society, in particular the perennial question: whose land is this, anyway? The latest is No Surrender: the land is Indigenous, by Athabasca University professor Sheldon Krasowski. Like this reviewer, Krasowski was born on Treaty 6 territory, in the city of Saskatoon, where he began his pursuit of Indigenous studies. Krasowski has gone on to pursue his academic career at Trent University in Ontario, and more recently at the University of Regina.

The reference to Treaty 6 is important for non-Indigenous readers to notice, since it places the author within the context of the struggle over the western plains which began with the colonial expansion of the 1700s.

Indigenous residents of the region from northwestern Ontario, across the prairies to the northeast section of British Columbia, are well aware of the “numbered treaties” 1 through 7, negotiated during the 1270s between the new Canadian capitalist state and the Indigenous nations. By the end of that decade, the Indigenous peoples of the region were shackled by the new Indian Act and the occupation of their lands. But few of the immigrants who were encouraged to settle the region, or their descendants, had any real awareness of the terms or significance of the numbered treaties, which largely locked their Indigenous neighbours onto scattered reservations.

There was always resistance among the First Nations (and the Metis) to this massive theft of the inherent Indigenous territories, and to the genocidal policies of assimilation, especially the infamous residential schools, the murders and disappearances of Indigenous women and girls, and the realities of unemployment, poverty, incarceration, and so forth.

But a new chapter of resistance began with the federal Liberal government’s 1969 White Paper, a sweeping policy change which would have dramatically accelerated the assimilationist drive of the Canadian state, effectively eliminating the status of Indigenous peoples as distinct nations which had signed formal treaties with Canada (and with the previous British and French imperialist powers). The White Paper would have extinguished the treaties and stripped Indigenous peoples of their inherent lands. The resulting political outcry forced Pierre Trudeau and his Indian Affairs minister, Jean Chretien, to drop the White Paper.

But the assimilationist project has never been abandoned, and in fact, as Krasowki’s book shows, it goes all the way back to the era of the numbered treaties as a key strategy of the post-Confederation Canadian state.

As the author stresses, there are several prevalent views of the treaty process within academia and society at large. One is that unfair treaties were the product of a collision between societies which did not understand each other. Another is that the treaty negotiations were imposed by the encroaching Canadian state. Both concepts, in Krasowski’s view, fall short of a full understanding.

The title, No Surrender, expresses his view that the Indigenous nations of the prairies were in fact quite knowledgeable about the nature of their adversaries – much more so than the reverse. His conclusion, based on in-depth studies of all materials related to the adoption of the numbered treaties, is that the Indigenous nations sought to preserve their status and to protect their land base by pressing for permanent treaties. The book presents relatively unknown information such as transcripts of speeches during the negotiations by chiefs and other representatives of their peoples – an oral history which was completely rejected by generations of Canadian courts and scholars until the last couple of decades.

It is quite clear from Krasowski’s work that the Cree, the Saulteaux, the Blood, and the dozens of other nations which negotiated the numbered treaties believed that they were agreeing to forms of shared use of their traditional territories. At first, they tried to negotiate terms which would limit the incoming settlers to specific tracts of land – reservations in reverse, as had been the initial case at Red River. When this attempt was rebuffed, they agreed to accept reservation lands chosen by their own chiefs, in exchange for allowing the settlers to practice agriculture on other suitable lands, leaving the Indigenous peoples the full right to hunt and fish on lands not used for agriculture.

Tragically for the Indigenous nations, the Canadian state, having been compelled to enter the treaty process in order to facilitate easy settlement of the prairies, had no intention of accepting such an interpretation of the numbered treaties. Canada rode roughshod over the Indigenous nations, who used a variety of legal and political tactics to push back with little success, until the tide slowly began to turn in the late 20th century.

Despite some legal successes, the Indigenous nations of western Canada still face huge obstacles, in large part due to the perception (encouraged by the capitalist state, mass media and academia) that the numbered treaties involved the voluntary surrender of Indigenous lands. Krasowski’s book makes a powerful case that this narrative is fundamentally incorrect, and that western Canada is indeed still Indigenous land.

It’s a point that should be known far more widely, as the battle over the Liberal government’s TransMountain pipeline expansion project continues, in the courts and on the ground where Indigenous and non-indigenous opponents are gearing up for civil disobedience and other resistance tactics.

“Krasowski’s thorough study of recorded eyewitness accounts, original manuscripts, and a handful of recorded First Nations oral accounts demonstrates that the Treaty Commissioners said little to nothing about the surrender clause during the negotiations.” (From the foreword by Winona Wheeler)