By Norm Knight and Drew Garvie

Several hundred members of the Canadian Union of Public Employees (CUPE) held a “Rally for Fair Wages” at the New Brunswick Legislature on March 19, coinciding with the new Progressive Conservative government’s first budget day. The rally, also attended by members of other unions and the general public, was in support of nursing home workers’ demands for a raise and their right to strike and bargain freely.

Two weeks before, the 4,100 nursing home workers organized by CUPE voted overwhelmingly in favour of a strike and gave strike notice. They were stopped by an judicial stay asked for by the Tory government, arguing that nursing homes are an “essential service” and that therefore they have no right to strike. The union’s fight in the courts is ongoing, with a hearing scheduled for April 17.

The March 19 rally demanded the government stop using the courts to keep workers on the job, and instead direct the New Brunswick Association of Nursing Homes to bargain in good faith. The workers at 46 non-profit nursing homes across the province have not had an agreement for two years. 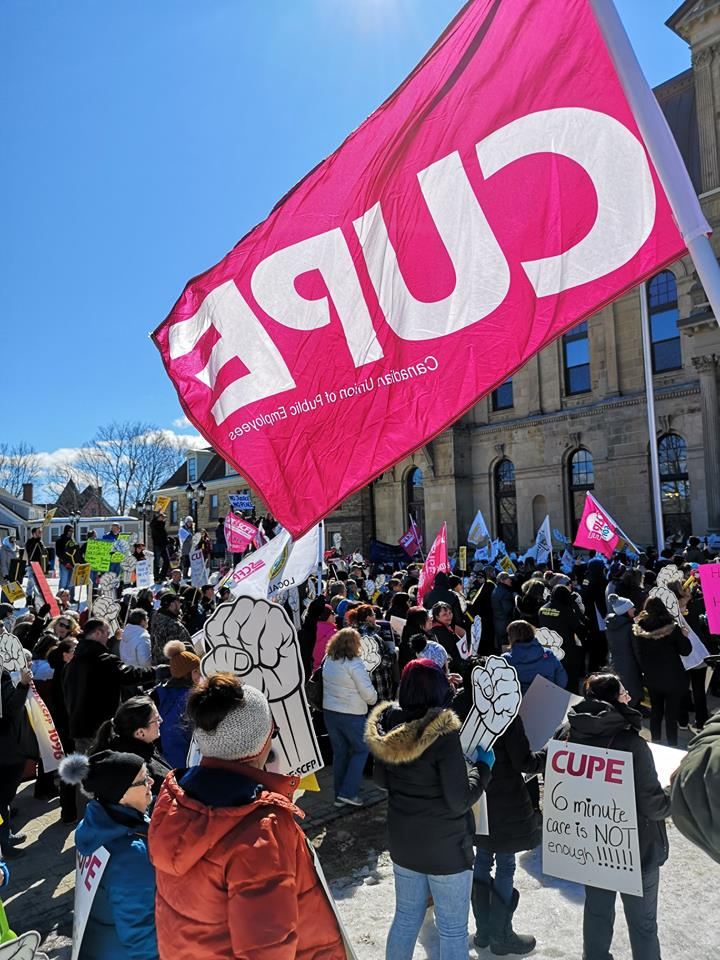 With several hundred workers waving large unity fist signs, CUPE New Brunswick president Daniel Légère demanded real wage increases for public sector workers in New Brunswick, whose wages had been eroded in the last ten years, in some cases by 10 percent. The decline in purchasing power has meant that workers are moving to other provinces to find work in the same field.

The Communist Party of Canada, with a newly organized club in Fredericton, was in attendance along with contingents of other unions. All political parties represented in the legislature addressed the rally: PC, Liberal, Green, and People’s Alliance (PANB).

Premier Blaine Higgs was largely drowned out with boos from the workers. “We can scream at each other all we want,” he told the crowd. “But at the end of the day we have real issues that we have to fix”. He proceeded to get into an argument with Sharon Teare, President of the New Brunswick Council of Nursing Home Unions over his government’s trampling of her members’ right to strike.
Kris Austen of the PANB blamed the discord between public sector workers and the government on “decades of Liberal and Conservative mismanagement” and promised to try to get the nursing home workers “somewhat of a pay increase.” His speech drew some cheers from the workers, seeming to suggest that the nature of his right-wing populist party, elected to the legislature for the first time last year, is not understood. The PANB is an anti-Acadian party that has promised to support Higgs’ minority government for the next year and a half. This is an anti-working class party in a populist disguise.

Liberal and Green leaders gave speeches in support of the workers’ demands for higher wages. However, a Liberal government was in power until last year and has helped create the current crisis in nursing homes.

Légère, who was given details of the budget as it was being debated in the building behind him, deplored several of its features, including that “they want to tie public sector wages to performance targets,” and that “Higgs is giving all MLAs $400,000 as a slush fund to spend in their constituencies.”

Minerva Porelle, Scretary-Treasurer of CUPE NB and of the New Brunswick Council of Nursing Home Unions told the premier it was a “shame” that “you want to balance your budget on the backs of the senior citizens.”
Patrick Colford, President of the New Brunswick Federation of Labour, said that workers’ wages had declined across the province and that more and more working people are relying on food banks to get by.

Légère ended the rally with a clear message for the premier: “Be scared of workers’ power. You have a very fragile minority government. We can, and we will, topple that government…. Today is the start of our journey to topple this government.”

The majority women workers in nursing homes in New Brunswick are the first to step up against Higgs’ new austerity government. Their fight against governments’ increasing reliance on “essential service” and “back-to-work” orders is shared by the postal workers who were ordered back-to-work late last year by the Trudeau government. Only solidarity and struggle have the power to turn the tables in New Brunswick and across the country.