The walkout was initiated by two student groups, March for Our Education and Decolonize Canadian Schools, in response to the provincial government’s decision to replace the updated sex-ed curriculum with one from 1998, and to roll back the incorporation of Indigenous knowledge, teaching and history into the school system.

“We the students need to show our government that we do not consent to this action,” reads the call to the action. “The impacts of these changes have been repeated by hundreds of experts: they will not keep our students, our women, our LGBTQ+ community, or our Indigenous population safe. It’s time for us all to stand up and fight for our right to education. Which is why on September 21st, 2018, students across Ontario are invited to participate in a walkout.”

Both groups are grassroots networks – neither organization is maintained by funding or staffing or has an established provincial structure. In fact, key organizers Madyson ‘Indygo’ Arscott (DCS) and Rayne Fisher-Quann (MfOE) never even met in person until the day of the walkout. And yet, within just three weeks, the initiative had spread to schools throughout the province, from Ottawa to Windsor to Thunder Bay and all points in between. Nearly one out of six high schools in Ontario participated.

In the city of Guelph alone, 1000 students left their schools and converged for a rally at city hall. This was one of the largest rallies in Guelph in many years.

The people who participated bravely risked discipline from schools and the possibility of violent counter-protests from people opposed to their action. Many news media sites have been barraged by anti-walkout comments, labelling students “lazy” or “entitled” and calling for mass suspensions.

Fisher-Quann has had to respond to attacks on her Twitter feed, spewing everything from lies about student rights to insults about her intelligence to sexist and lewd comments about her personal appearance. These kinds of attacks have been met with expressions of solidarity and support from unions and progressive organizations, teachers and education workers, and countless individuals.

At a moment when the Ford government is perpetrating a comprehensive assault on the working class in Ontario, with the fightback still emerging and tentative, the student walkout is an audacious and inspiring development. 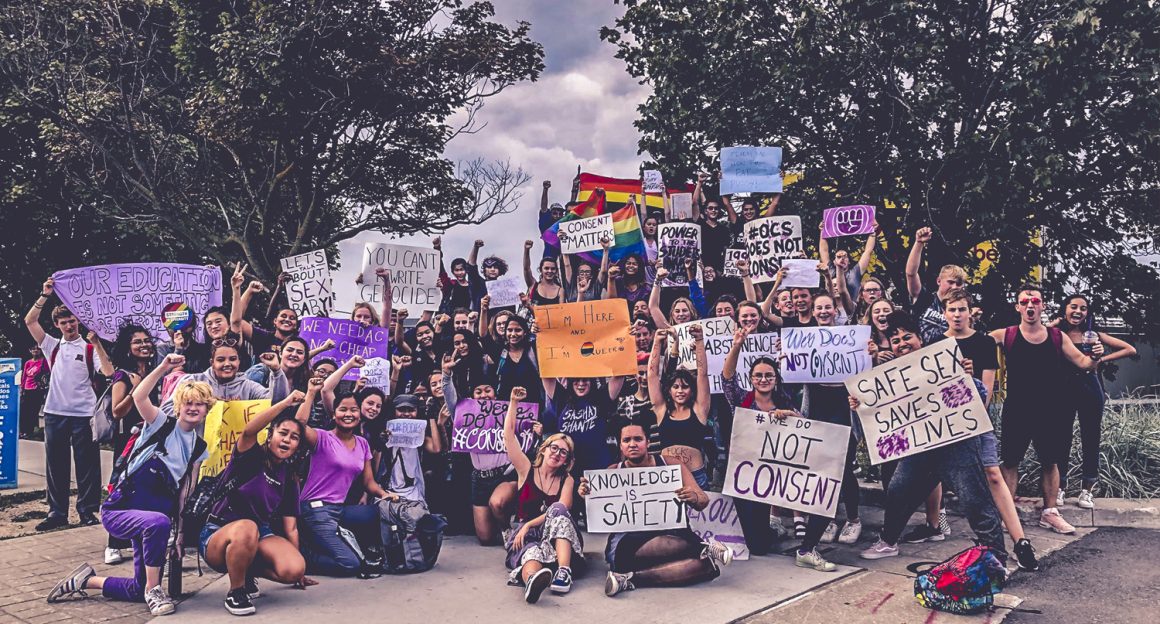 The walkout was not organized through convention deliberations and conference planning sessions, but through social media, hashtags and cloud documents. It was not executed through weekend rental bus trips to Queen’s Park and paid per diems, but through mobilization and action in the local community during school hours.

The point here is not to counterpose one type of organizing to another, but rather to recognize the enormous – and growing – capacity for spontaneous mobilization and resistance. There are other recent examples. The Women’s March in January 2017 mobilized, within only two months of Donald Trump’s election, seven million women and supporters into the streets worldwide to oppose his misogynist policies and statements. The Sept. 21 walkout occurred on the heels of large and defiant spontaneous protests in Toronto, against Ford’s decision to use the Constitution’s notwithstanding clause to impose cuts to the size of the city’s municipal government.

For many people, there are parallels with the development of the fightback against the Mike Harris Conservatives, in the late 1990s. At that time the speed and breadth of the government’s attacks also led to spontaneous and mass mobilization. This spontaneity was a key factor in rapidly building up fightback structures, particularly local coalitions that fed into provincial networks. These structures, in turn, were instrumental to the success of the Days of Action – single day general strikes and protests held in several cities across the province, that were organized with the Ontario Federation of Labour.

Here lies an important lesson – spontaneous resistance and opposition needs to become organized if it is to be sustained and developed. If 40,000 people can be mobilized province-wide in a spontaneous and grassroots manner, imagine what could happen if the labour movement committed its structure and resources to this kind of effort. Many progressive voices have issued statements of solidarity for high school students in Ontario. But to really defend and support students means building a movement that can confront the full range of attacks and oppressions that affect them.

The student walkout was, by far, the largest single protest against Ford to date, and it represents a huge step forward for the fightback in Ontario. It is now up to the other progressive forces in the province – particularly the trade union movement – to match that step and build the next ones.

Only through united, escalating, mass action can the Ford government, along with the overall neoliberal and austerity agenda it represents, be contained and brought down. The stakes are too high for any lesser objective. Fortunately, 40,000 high school students have helped illuminate the path to achieving it.