The legal and political battle around the Ontario government’s Bill 5, the Better Local Government Act, once again proves the need for democratic constitutional reform in Canada.

The City of Toronto’s successful initial court challenge of Bill 5 was a victory for local democracy and the public. Specifically, the Ontario Superior Court struck down a key section of the Act, imposing the reduction of Toronto City Council from 47 seats to 25 for the municipal election on October 22. The decision by Doug Ford’s Conservative government to use the Constitution’s notwithstanding clause to override the court decision shows they were prepared to use any weapon available to impose their anti-democratic agenda. Subsequently, an Ontario Court of Appeal ruling allowed Ford to avoid using the notwithstanding clause, but the underlying issues remain crucial.

Bill 5 also attacks the regional municipal governments in Muskoka, York, Peel and Niagara, by replacing their elected heads of council with appointees. The goal of the legislation is to weaken local democracy, in order to strengthen the power of the corporations in municipal decision making.

It is clear that the working class cannot count on either the government or the Constitution to be on its side – that is, to defend democracy, to defend the public interest, and to be accountable.

It is also clear that the Ford Tories intend to govern using brute force as needed.  This is the government’s first demonstration of its anti-democratic and authoritarian bent, but it will not be the last. 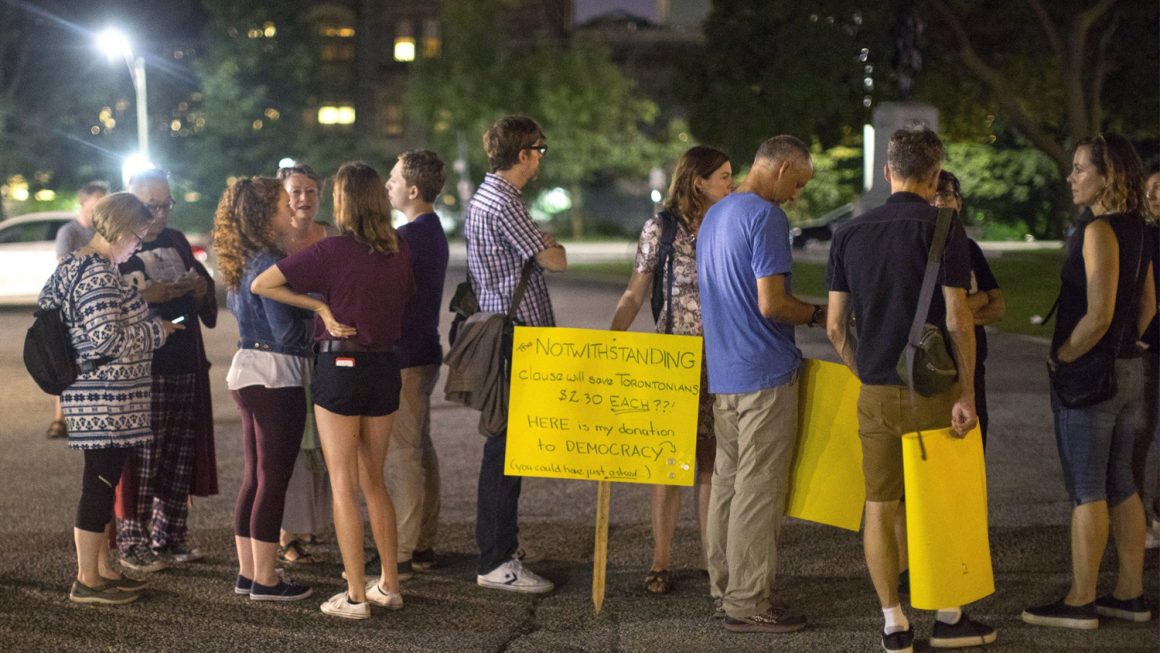 It is another indication that the working class must build an escalating struggle to defend and extend its rights – through mass mobilizations, petitions, protests, defiance, and the kind of civil disobedience that protestors at the Ontario Legislature showed over the passage of Bill 5.

It is also an indication that the Constitution needs to be changed, to eliminate its undemocratic and authoritarian content.

The notwithstanding clause is itself a reflection of serious undemocratic faults in the Constitution. It is a clause added in the final night of negotiations in 1982 which removed Quebec’s power to veto decisions made in English-speaking Canada that would negatively affect the people of Quebec. The Constitution’s final text was negotiated by 9 premiers, deliberately excluding the Premier of Quebec so as to block opposition and impose this decision on the government and the people of Quebec. The decision further reduces Quebec’s status in Canada to being one of ten provinces, and denies its de facto existence as a distinct nation within Canada with the right to self-determination up to and including secession.

The Constitution likewise does not reflect a nation-to-nation relationship between the government and Indigenous nations in Canada, nor reflect the rights of Indigenous nations and peoples in to self-determination. Vestiges of Canada’s colonial past, and its relationship with Indigenous peoples, run through the Constitution. Combined with 500 years of physical and cultural genocide, and forced integration and theft of Indigenous land and resources, the only basis for reconciliation is through recognition of Indigenous status as nations with the right to self-determination.

These massive flaws cannot be corrected with small amendments.  This requires a new Constitution, drafted by a Constituent Assembly reflecting the nations in Canada and with participation from labour, women, youth, and racialized people. Such a process is necessary to guarantee a constitution that truly reflects the rights and interests of the people of Canada, rather than the banks and the transnational corporations.

The fight for democracy and social progress is on and is likely to get much bigger before victory can be declared. The Communist Party will continue to give its full support and to this just and vital struggle.