On Sunday, August 5 a confrontation took place in Nanaimo outside the homeless camp known as DisconTent City between protesters wanting to dismantle the camp and counter-protesters.

The group called Action Against Discontent City organized the protest on its Facebook page, which involved marching past City Hall to the tent city. They were approached by a local chapter of the Soldiers of Odin, a right-wing “street safety” patrol, to act as security at the protest, which they welcomed openly. The Alliance Against Displacement and organizers of DisconTent City staged a counter-protest in anticipation to defend the camp.

DisconTent City is located on 1 Port Place Drive and is estimated to have around 175 to 200 homeless residents, some saying it is the largest tent city in British Columbia. In March, homeless residents and advocates pitched up tents in front of Nanaimo City Hall after city council voted against allocating $7 million of provincial funds towards supportive housing. This protest camp only lasted a week when police evicted the homeless occupiers off the lawns of City Hall, forcing them to relocate in a public park. On May 17, organizers and homeless residents cut the chains to the entrance of a fenced off empty lot between Esplanade and Front street and moved into the area, naming the new camp DisconTent City.

DisconTent City has been a site of contention in Nanaimo since its founding and local opinion has been polarized. Many housed Nanaimo residents have shown their support by visiting the camp and offering donations such as spare tents, food, and bottled water bought from the neighbouring Thrifty’s store. Those sympathetic to the camp include low income workers who have either experienced or are on the verge of homelessness themselves.

Others have expressed their discontent toward the tent city on social media and have harassed homeless residents from the Thrifty’s rooftop parking lot that overlooks the camp. Vigilantes have even thrown rocks and bottles into the camp, injuring one woman.

DisconTent City still manages to stand despite constantly being under attack. Along with the growing number of homeless camps in BC and Canada, it is a symptom of the problem rather than the cause. That cause is low wages, high rents, and unemployment caused by a capitalist system that benefits the rich at the expense of the poor.

The public has had to answer the call by camp organizers to rally in its defence on multiple occasions, such as on May 29, when an injunction was filed by the City of Nanaimo ordering campers to be evicted that morning. A citizen lamented in a letter to the local newspaper after the event that “activists ran around holding a Canadian flag upside down” and that a YCL member supporting the camp “waved an old communist USSR hammer and sickle flag and paraded around smiling.” Supporters were called to rally at DisconTent City again on July 26, when Fire Chief Karen Fry threatened to shut down the tent city due to the tarps in the camp being a supposed fire hazard. August 5 had the largest number of supporters show up, since the camp has never before faced a threat as great as the Soldiers of Odin.

Before noon people were already gathered outside the gates to defend DisconTent City. The number of supporters for that day were around 150. Several community members on the opposite side of the street came to witness the commotion, distancing themselves from the counter-rally while the song “Which Side Are You On” played from speakers organizers had set up. Those attending the counter-rally were from the community as well from out of town; some had travelled all the way from Victoria just to show their support.

Coast Salish elder and matriarch Rose Henry also travelled with family to support Discontent City. She identified herself as a member of the Snuneymuxw First Nation and welcomed everyone to the territory, making it clear that the only ones not welcome were racist white-supremacists, giving full support and permission for the homeless residents to occupy the land. Rose Henry also performed a prayer and took part in leading the demonstration, instructing everyone to hold hands and form a circle on the street.

The Soldiers of Odin finally arrived to the protest with a Canadian flag, red maple leaves on their black outfits, and RCMP escorts for their protection, presenting Canada as the white-supremacist colonial state that it is. This was contrasted by the upside down Canadian flag flown within the camp and the Indigenous campers and elders in the counter-demonstration.

Neo-Nazi Mika Ranta founded the Soldiers of Odin in 2015 in Finland as an anti-immigrant street patrol gang. The president of the Vancouver Island chapter, Conrade Peach, denies that the group is white-supremacist or neo-nazi. “Those are baseless allegations; I defy anyone to produce evidence of my club being anything other than Canadian patriots.” Fascist movements throughout history have always been hyper-nationalist and often used the excuse of patriotism to hate outsiders and minority groups. In March 2017 the SOO tried to disrupt an anti-racism rally in Vancouver, and protested outside a mosque in Surrey.

“Do not engage!” DisconTent City organizer Amber McGrath repeated over the speaker system when the Soldiers arrived, warning campers and supporters not to provoke violence. “Homes not hate, smash the hate, we will not negotiate” Ivan Drury chanted for the crowd to repeat. Some camp defenders such as organizer Kevin Donaghy could be heard replacing the second verse with “smash the state.” Drury has organized tent cities in Maple Ridge as well as Nanaimo, and was listed in Vancouver Magazine as one of the 50 most powerful people from the city.

Many brought picket signs to the counter rally with images of peace symbols and hearts attempting to combat the hate with love. “Everyone deserves to be loved,” Amber McGrath shouted, instructing counter-demonstrators to throw up their hands and greet the Soldiers with peace signs. A few, some homeless residents, gave the Soldiers the middle finger instead. Those more serious about fighting bigotry had zero tolerance for the white-nationalists and brought signs that read “NAZI PUNKS FUCK OFF” as well as banners, flags, and shirts with anti-fascist imagery.

Despite the small disagreement of tactics and rhetoric, the counter-demonstration remained united and managed to turn away the Soldiers of Odin without any police arrests or violence. The overall atmosphere at the end was positive when the Soldiers eventually departed, which reinvigorated support for the camp. 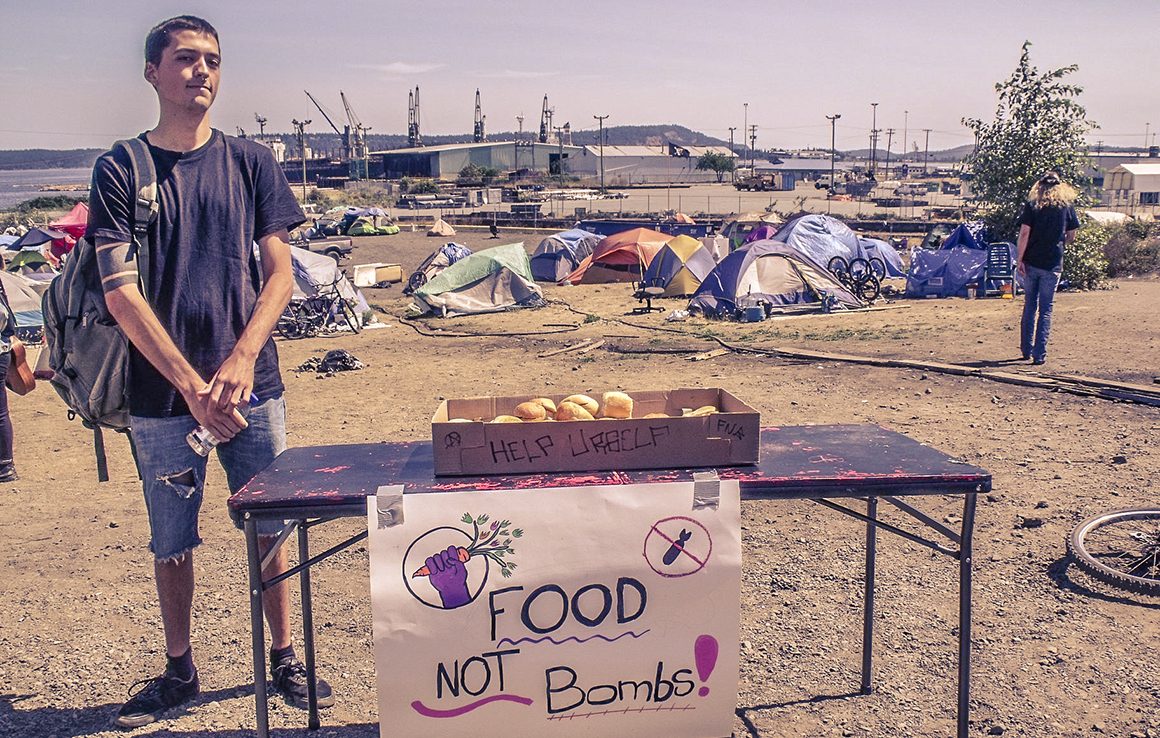 A newly formed Nanaimo chapter of Food Not Bombs provided free sandwiches to campers and counter-demonstrators, making its debut at Discontent City that day. Local YCL members have been helping with the food justice initiative and are also in the process of forming an official YCL club.

Nanaimo itself has not been known in recent years for having any strong left wing movements; the local Communist Party club has remained active, but has not run election candidates. The NDP has a stronger presence in Nanaimo, with Leonard Krog as MP and Sheila Malcolmson as MLA. The NDP’s youth wing, the Young New Democrats, is also quite active at the local Vancouver Island University campus. Pele Gouda, YND club leader at VIU last semester, participated in the counter-rally and even posted a video of himself on Facebook days prior urging people to support the camp. In the video he says that “Nanaimo is facing a potentially pivotal moment in [its] political identity.” Gouda was at the counter-demonstration, but Krog and Malcolmson were nowhere to be seen, even though Krog’s office is just down the street from Discontent City.

Chris Green posted on Facebook after the event announcing they were “[v]ery happy to have stood with anarchists, communists, socialists, First Nations people, a Wobbly, and at least one person in a Green Party T-shirt, all standing up to a proto-Nazi attempt at intimidation.”

The presence of the Soldiers of Odin in Nanaimo was a wake up call to locals who previously assumed that white-supremacists were not a real threat at home. It was a call to action for those previously apathetic or passive in their political stance. DisconTent City itself is an example of a local government that ignores the needs of many. The confrontation also presented to the public what sort of people oppose DisconTent City — racist Canadian nationalists — and who support it — Marxist-Leninists, anti-capitalists, and progressives.

For left leaning folks it was an opportunity to openly reveal themselves, and actively fight for their principles out in the open. It revealed just how many people in the community have revolutionary views against capitalism and colonialism and the need to stand in solidarity with each other. The confrontation at Discontent City was not just a small victory for working and Indigenous peoples, but also for the left in Nanaimo. 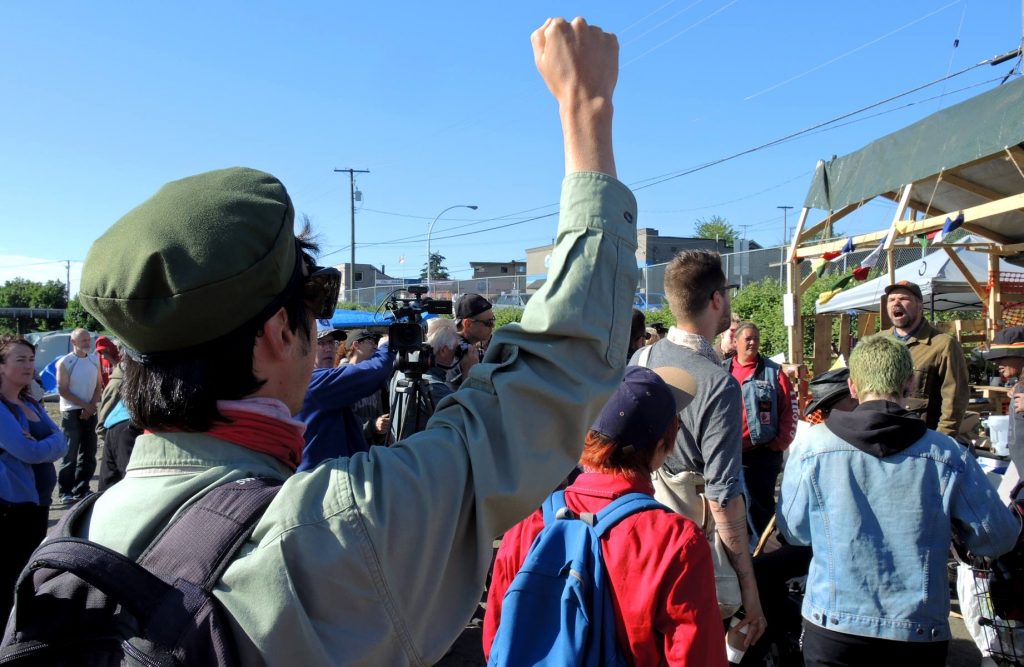