A recent opinion piece by Michael Harris in iPolitics titled “Harper’s willingness to appease Trump should scare all Canadians” comments on the fact that former Conservative PM Stephen Harper “is back representing Canada on the world stage.” In fact he is making a full-fledged public appearance with a new book coming out soon and a big splash in the news speculating about his visit to Washington on July 2. [1] No one seems to know the reason for the visit, which is private. He is not really representing Canada. Not that he has ever really represented the popular will of most Canadians. Disdain is the most descriptive characteristic that can be associated with his behaviour.

It was simply a matter of time before Harper would surface again. And surely, as Harris suggests, Canadians should be concerned since he is still capable of causing some political damage. But should Canadians be less concerned if Harper was not in the news? Harper will continue being Harper both in and out of public life. No surprises there. It’s old news. But the fact that we have a Trudeau turned into a Harper, that should scare the hell out of most Canadians.

The article uses Harper’s reported view that “the world would just have to get used to the new world order Donald Trump is trying to impose on everyone” as an excuse to really justify an attack on Trump. Harris uses several paragraphs to highlight all the bad policies that the Trump administration is implementing. We certainly do not disagree with Harris, especially when he refers to “Trump’s fascist impulses.”

However, Trump will continue being Trump. That again is old news. US-Americans should be concerned about that and should act on it if they care. In Canada, as in the rest of the world willing to resist the US imperial dominance, we should be more scared at the blind spot that the Liberal government is attempting to create vis-à-vis “Trump’s fascist impulses.”

Harris asks the valid question “Will anything survive Trump’s presidency?” But that is a passive question. I would like to ask a pro-active one: What is Canada doing to offset the dismal implication of the question?

My short answer is, not much. On the contrary, the Liberal government continues to have a foreign policy fully aligned with that of the US, despite some recent political bickering on trade. There is nothing Harper can do to make it worse.

Canadian foreign policy has experienced a striking shift toward the political right in the last thirty years with both Liberal and Conservative governments at the helm. Following the world trend on globalization, Canada has moved from a perceived peace promoting position on the world stage to an outright recognized wars and uprisings supporter, and weapons exporter that rivals very closely with the Trump administration. The most dramatic examples of policy changes in international relations have occurred during Chrystia Freeland’s tenure as Minister of International Trade of Canada (2015–2017) and as Canada’s Minister of Foreign Relations since January 2017.

The Hill Times recently reported an increase of 44% in Canadian military exports in 2017 with almost half of the exports going to Saudi Arabia. [2] The aggressive military involvement of Saudi Arabia in the Middle East, not to mention the human rights abuses domestically, does not bode well for the often-upheld Canadian values. This is a typical example of trade priorities over more humane considerations.

Closer to home, Chrystia Freeland has tacitly and actively supported regime changes in Latin America. In the case of Venezuela she has taken an infamous leadership role – together with the US and EU governments – to subvert the constitutional order. She has done so by promoting and supporting a violent opposition and calling the military to a rebellion. Freeland heads the so-called Lima Group – a splinter group of a dozen nations outside the more formal Organization of American States – pushing the Nicolas Maduro government to a crisis, and sanctioning Venezuelan high-ranking officials. This extremely aggressive interference can only be explained as a defense of Canada’s corporate mining interests in Venezuela and other Latin American countries.

There are more examples that Chrystia Freeland is imposing a personal ideology on Canada’s foreign policy. “Canada supports the most extreme form of sectarianism” in Syria, reports Global Research. [3] She chooses to ignore the neo-Nazi surge in Ukraine, and even more “Ms. Freeland appears to be less the foreign minister of Canada and more the foreign minister of Ukraine.” [4] She has also manifested an old Cold War attitude towards Russia. 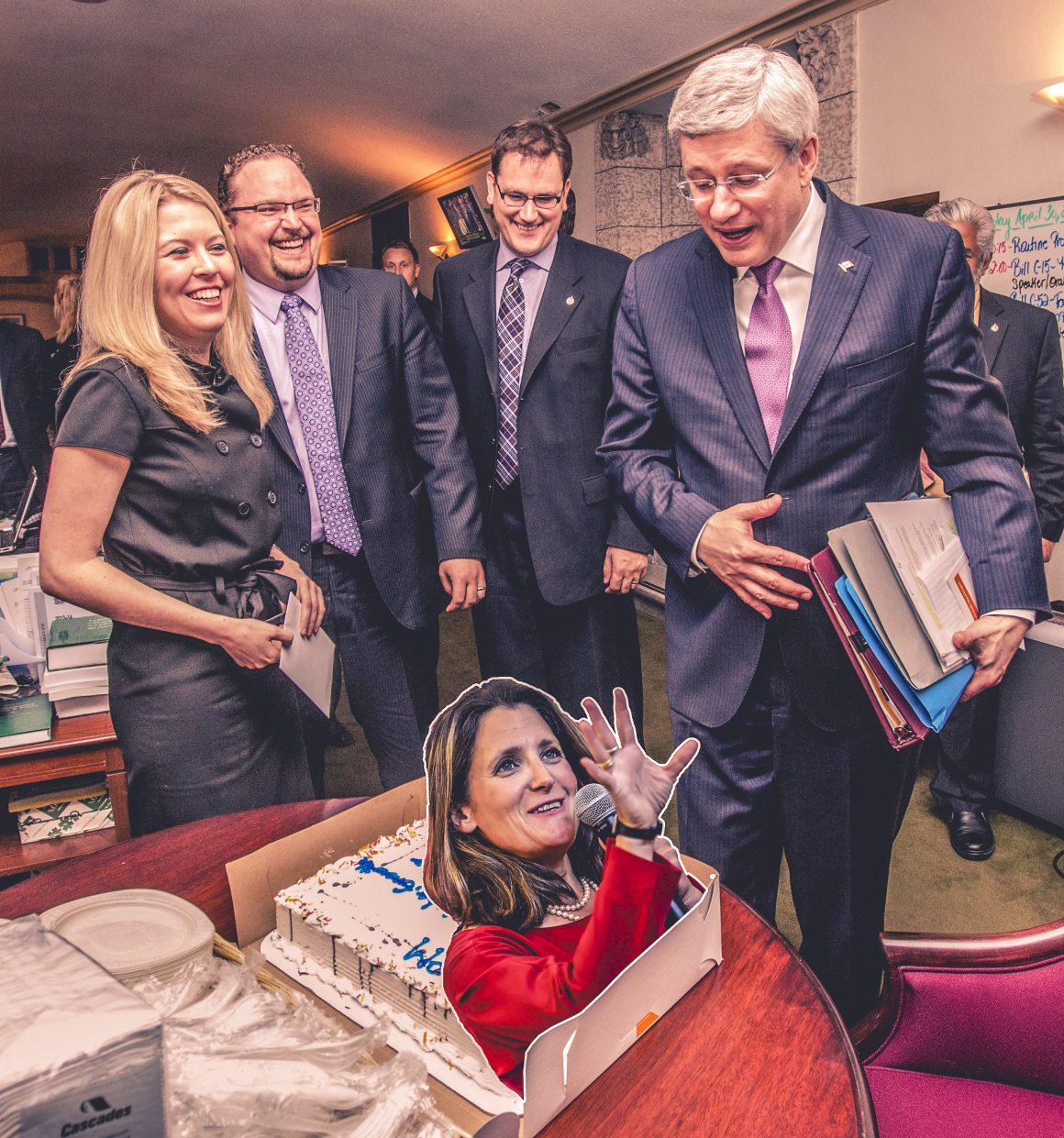 Stephen Harper is likely quite proud of the current foreign minister and Canada’s foreign policy. Michael Harris warns Canadians about citizen Harper but he does not warn about the Trudeau government as represented internationally by Freeland.  Considering Freeland’s recent speech in Washington, Harris should consider a follow up article titled “Freeland’s willingness to appease Trump should scare all Canadians.” [5][6]

Canada should detach itself from the grip of an old unipolar US-centered world and accept a shared multipolar world. It should stop imposing its own ideological authoritarianism blaming the victims when they exercise their sovereign rights. We need to gain the trust of other nations by sincerely seeking peace and mediating for peace, especially in the Americas. We would benefit from welcoming the genuine trade connectivity expansion coming from China. We should support the war-deterrent balancing role that Russia is exerting in the Middle East.

By moving forward with these strategies Ms Freeland would help gain respect for Canada (and herself) from Canadians and the rest of the world, and contribute to world peace.