This summer marks the 35th anniversary of the Solidarity struggle in BC – the first major response in Canada against the emerging neoliberal austerity agenda of far-right sections of the ruling class. Promoted by economist Milton Friedman and the so-called “Chicago boys”, this agenda was first imposed on Chile under the Pinochet military dictatorship. From there it spread to Thatcher’s Britain and to the west coast of Canada, where the Fraser Institute had become a key think tank for austerity policies. 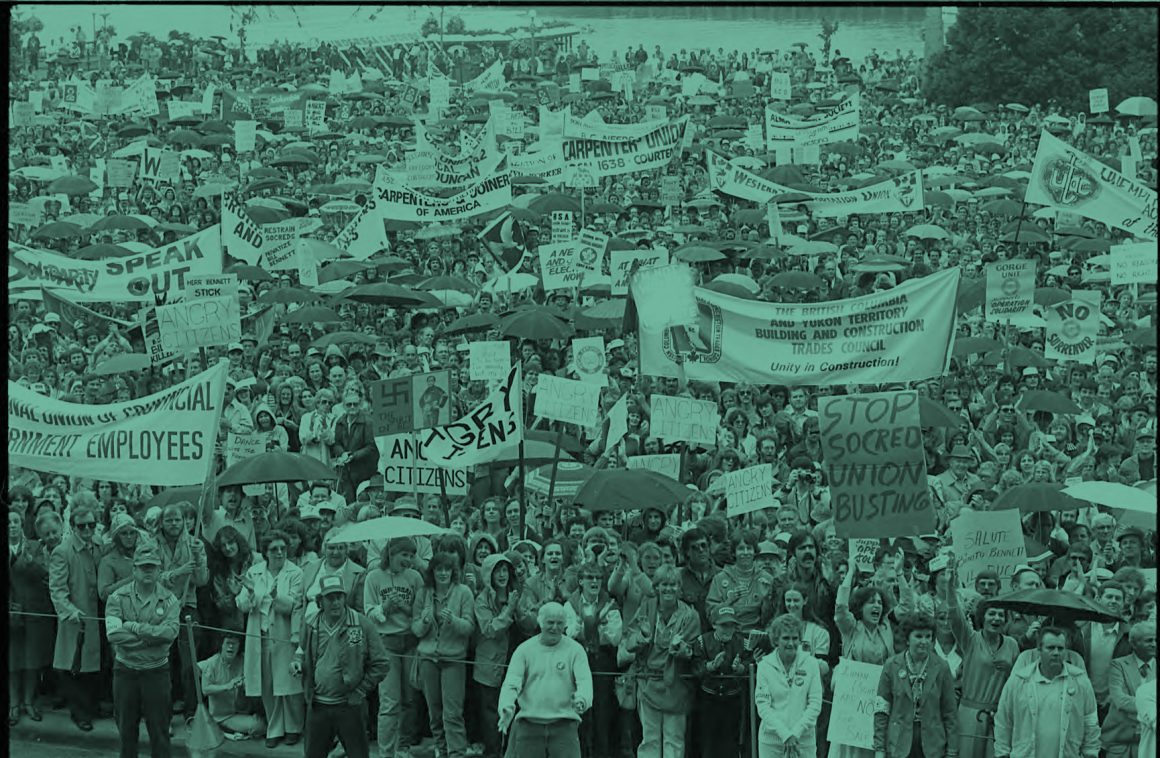 Given this setting, the massive Solidarity movement was a test case for labour and popular resistance. Many of the strategies and tactics used by various forces in 1983 are still hotly debated, as seen by comments on the July 6 article by Stanley Tromp on the Tyee website (“The RCMP Thought Solidarity Was a Communist Plot“).

This article discusses “revelations” about RCMP spying on the Communist Party, which played a significant role in the Solidarity movement. The documents obtained by Freedom of Information channels might surprise some who are not aware of the long record of RCMP surveillance against a wide range of radicals, trade unionists, indigenous activists, and others who challenge the norms of capitalist rule in this country. Even before the Communist Party was formed in 1921, the RCMP was monitoring and attempting to undermine the party which has consistently campaigned for socialist change since that time.

From this perspective, the fact that the RCMP knew that a member of the BC executive of the CPC had lunch with a member of the BC Teachers’ Federation leadership, on a certain date in a sandwich shop, merely confirms that the state police force has always been tasked with keeping tabs on the party. During renovations of the CPC’s offices in Toronto a few years before Operation Solidarity, listening devices were discovered in the walls and ceilings. When Party leaders held a news conference to reveal this illegal operation, the RCMP sent a representative to demand the return of its property!

The real question arising from this particular episode is rarely discussed. The issue is not whether the RCMP brass seriously believed that the Communist Party was capable of seizing power in the near future. Of course, during the Cold War, some right-wing politicians and police made this argument, but usually for their own red-baiting career purposes. (Brighter lights among the Mounties probably do understand that the Communists are the only revolutionary force which has ever toppled capitalism and embarked on the construction of socialism, and that even a small Communist party has the potential to lead a revolutionary struggle.) 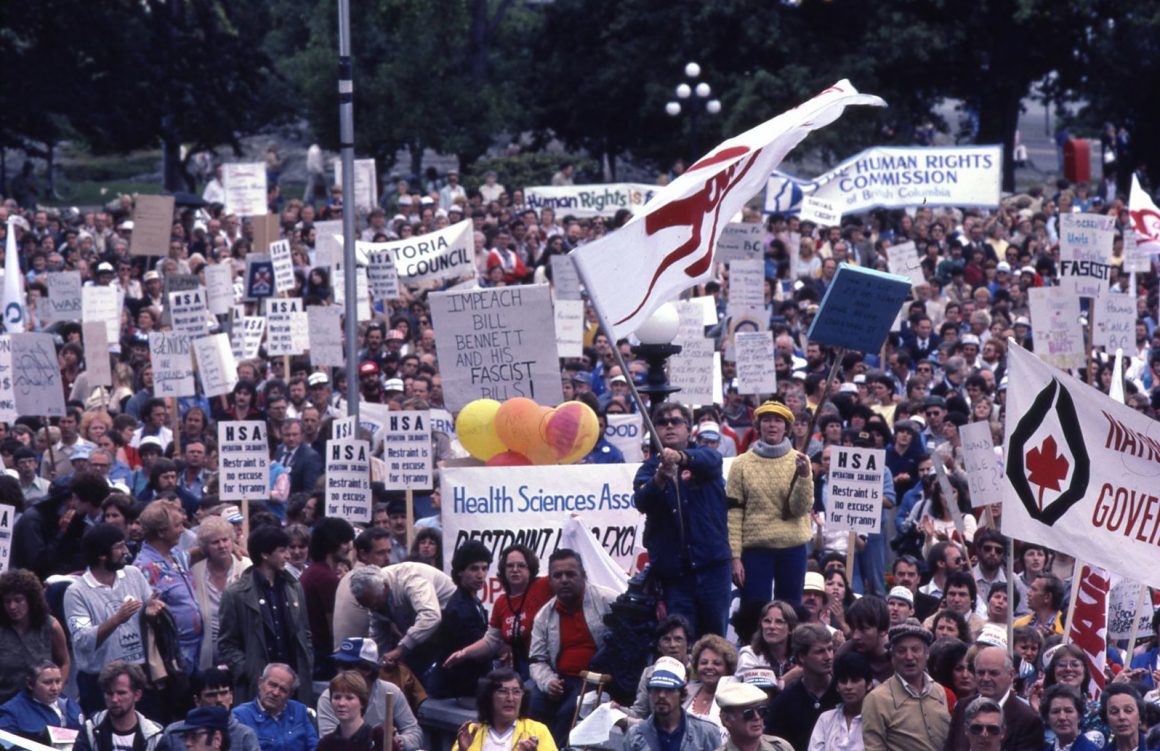 A better question is whether these forces believed that the Communists were capable of helping to challenge the dominance of bourgeois politics in Canada. And the answer to that different question is a definite yes. Why? Because the Communists have often proved it in practice. Despite our small numbers, on any number of issues – from the struggle for Medicare, to the movement to build industrial unions, to the call for peace and disarmament – the Communists have worked at the grassroots level and in the leadership of many organizations, patiently winning public opinion for progressive policies and demands. Sometimes we were the first to raise these ideas, but often we supported causes initiated by other forces which rallied broad popular opposition to the agenda of the big capitalist parties.

This track record is the main reason that the post-war Liberal federal government launched PROFUNC, the RCMP operation to collect highly detailed personal data on “professional functionaries” of the Communist Party. PROFUNC eventually tracked 50,000 potential “subversives” such as prominent CCF/NDP leader Tommy Douglas. The PROFUNC list was one basis for the roundup of some 500 left activists in Quebec during the so-called “October Crisis” of 1970 – most of whom had no connections with the separatist FLQ. 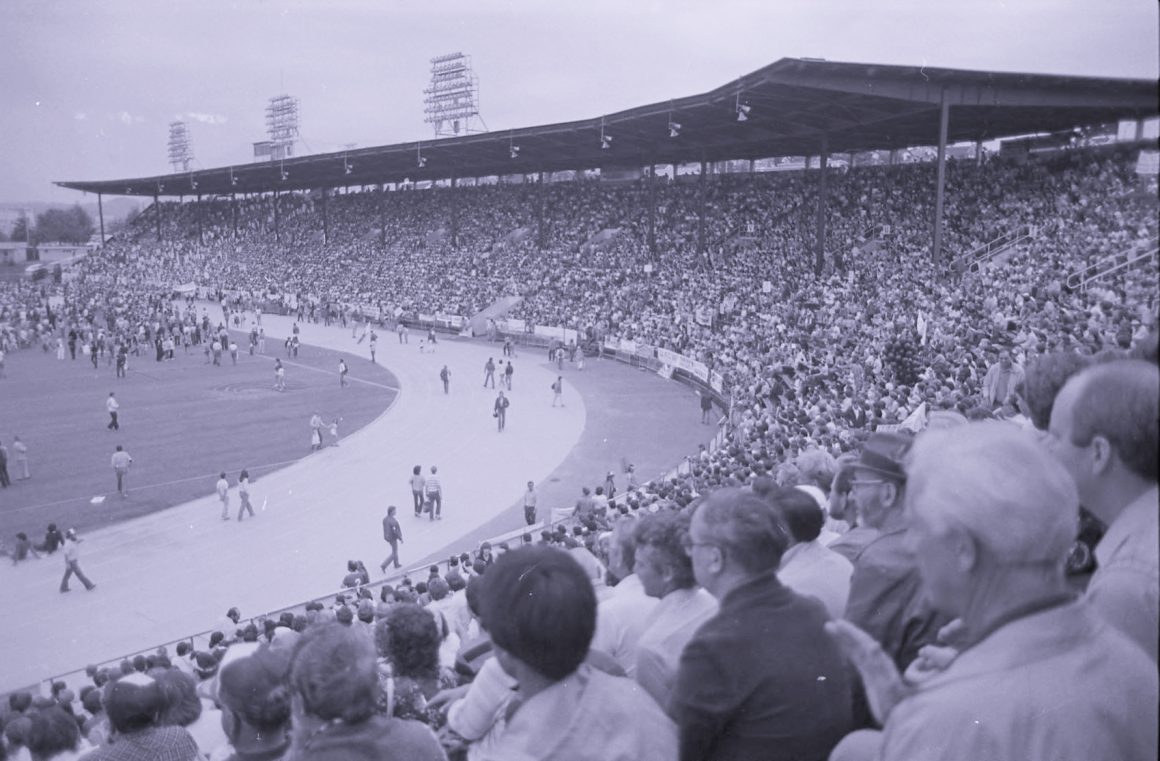 In the case of British Columbia in 1983, the Communist Party had a degree of influence in trade unions and other people’s movements, not just in a few pockets of the Lower Mainland, but across the province. When the Socreds moved to smash working people’s rights, the CPC mobilized to help call protests which soon became coalitions, and then a movement challenging the political legitimacy of the government. When it was crucial to organize cross-picketing at schools to help teachers join the strike movement, the Communist Party had a network of members and supporters to help make it happen. This was no secret. The CPC’s views were circulated in leaflets and news releases, and printed every week in the Pacific Tribune newspaper. The party’s representatives were well known.

For some, however, the CPC supposedly “failed” to block the Socred agenda. As subsequent events proved, this episode was an early part of an ongoing massive global strategy to wipe out every advance won in the wake of the defeat of Hitler fascism, despite strong resistance in many countries. There is no shame in having failed to defeat the first wave of this capitalist agenda; the only shame would have been to surrender when existing socialism was destroyed a few years later in the USSR and its allies in central and eastern Europe. 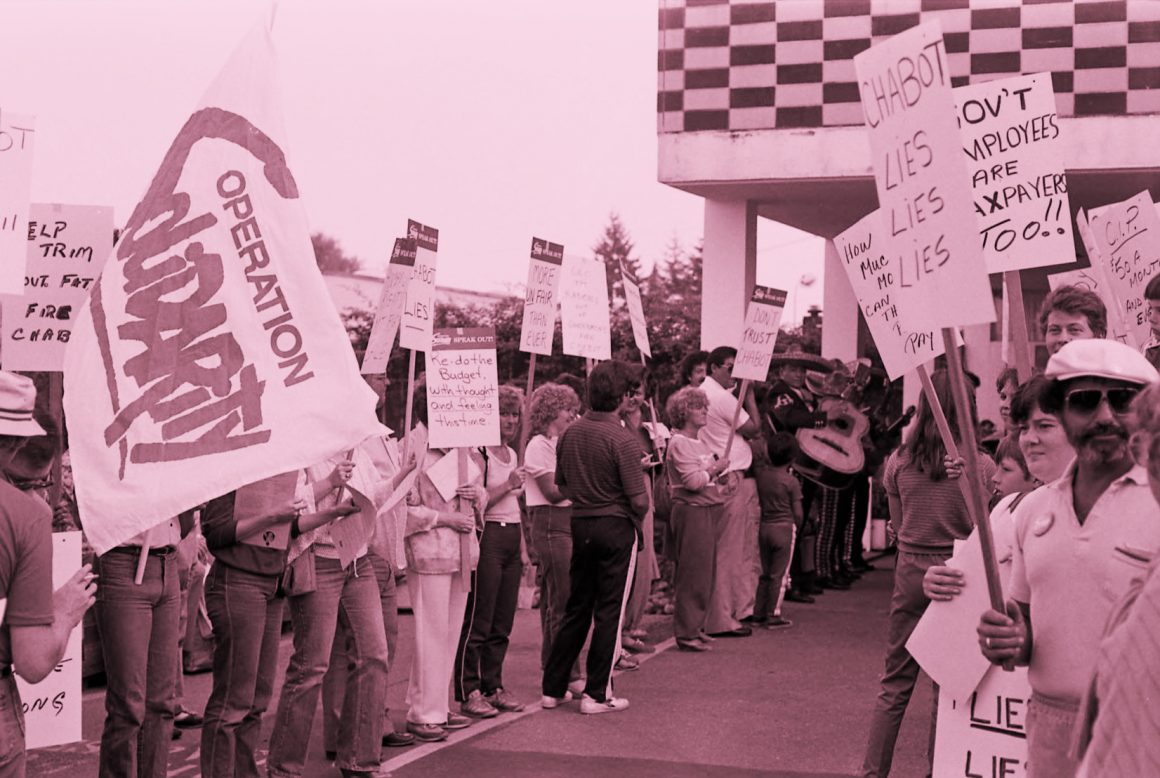 A different criticism is that the CP hoped to seize control of Operation Solidarity, turning the fightback into a movement for socialist revolution. This argument twists the classic statement by Karl Marx and Frederick Engels, that the Communists disdain to conceal their aims. Yes, our goal is the revolutionary replacement of capitalism by a socialist society.

But our aims also include the defense and expansion of a wide range of immediate social and economic reforms. In 1983 this meant blocking legislation which undermined the entire framework of labour and social rights, going back to the pre-WW1 miners’ strikes on Vancouver Island. As a working class party, the BC Communists were acutely aware that the Socreds wanted to make the lives of working people far more difficult. Our view is that in the course of fighting for their rights, working class people strengthen their ability to defend their interests, and gain a better understanding of the need for socialism. Absolutely. There is no contradiction here, nothing concealed up our sleeves.

Our role in 1983 was to use our influence in both the trade unions and community groups to come together and build a broad fightback coalition. From the beginning, there was some reluctance to get involved from some leaders of private sector unions, but Communists and others kept pushing for this strategy. Growing pressure from community and social activist groups, along with broad support from the grassroots membership of the NDP, pushed this agenda forward.

But it was never a happy coalition, despite the wild enthusiasm after initial successes. A lot of work was done behind the scenes to keep the BC Fed on board, which kept the private sector unions marginally supportive. Right wing social democrats were terrified that they were not in control of this movement, and when it came time for the private sector unions to step up to the table, they caved.

This brings us to one final general question: are the Communists surveilled by the state police because we threaten democracy? This question is often put another way, by those who argue that it’s acceptable to monitor the Communists, but wrong to target other activists.

The truth is that the Communists are not targetted because we oppose democracy, but precisely because we advocate the strengthening and expansion of democracy. In every crucial social confrontation in the past century, Communists have stood (on a few occasions almost alone) in defence of civil and democratic rights. Yes, we urge the trade unions and other social movements to take full advantage of all the democratic rights won by past struggles, including the right to refuse to work, to protest and speak freely without the fear of police attacks or having to pay “demonstration insurance”. Communists have often taken part in civil disobedience actions, defending the democratic right to defy unjust laws and to argue in court against the penalties imposed on those who do so. On many occasions Communists have been fined or jailed, not for opposing democracy, but for choosing to stand up for working people, not corporations.

In 1983, instead of meekly accepting that an elected government had the unfettered right to rip up collective agreements and social programs, the Communists encouraged working people to exercise all their democratic freedoms. When the Campbell Liberals pulled a similar move in 2001, Communists in BC joined in the movement to fight back, up to and including support for wide strike actions. 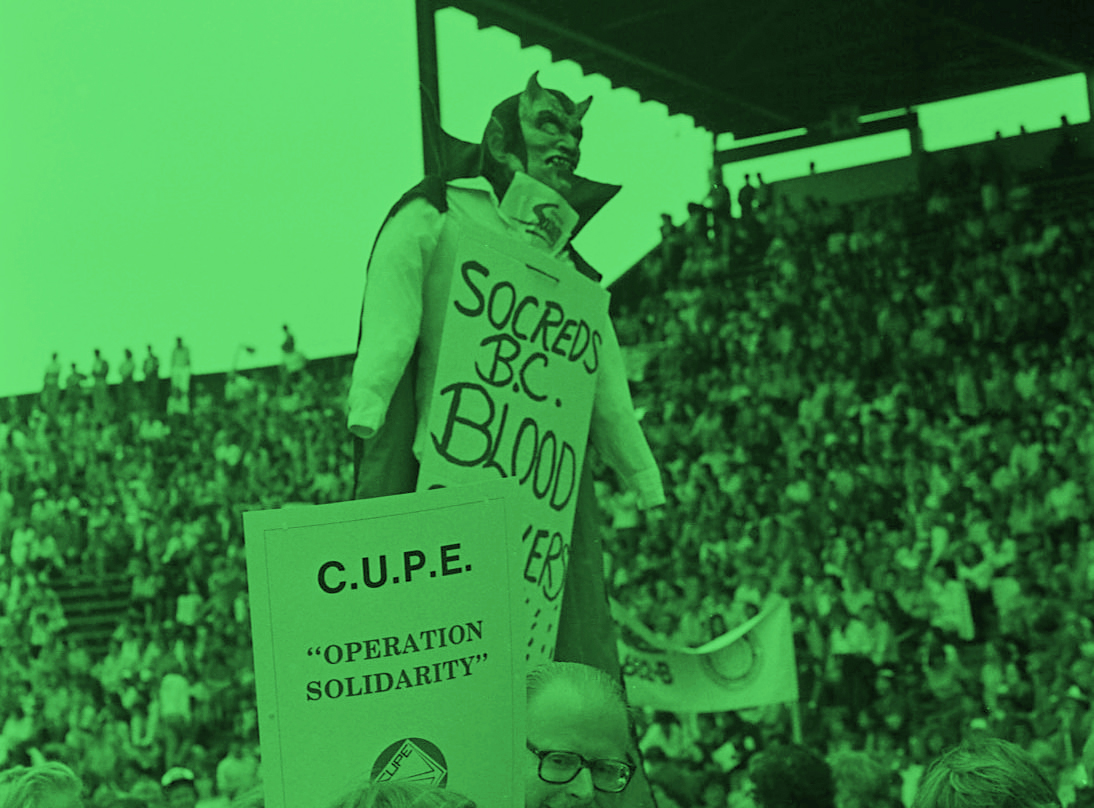 Does this mean that successes in such defensive battles are sufficient? Of course not. We believe that as long as our society is dominated by big capital, every gain, every movement forward, is under constant threat. We argue for going further, by placing political and economic power in the hands of the vast working class majority of this society. We are proud to say that socialism is inherently far more democratic than capitalism. We took that position in 1983, and today, more and more working class people, especially youth, agree with us. The capitalist state may have more surveillance and spying tools than ever, but it’s impossible to prevent people from sharing our conclusion that socialism is the only alternative to capitalist destruction of the planet.

(George Gidora is the leader of the Communist Party of BC, and Kimball Cariou is the editor of People’s Voice.)