A couple weeks ago, People’s Voice, “Canada’s leading socialist newspaper”, celebrated the 25th anniversary of its first printing. This is how the celebration was announced to invited guests: “Join us for an evening to celebrate the 25th anniversary of People’s Voice, speaking out against imperialist wars since our first issue in 1993. Featuring an international cultural program and delicious food.” The cultural program was kindly provided by a lively group of musicians playing Latin American revolutionary tunes, and the food was indeed deliciously prepared by volunteer chefs who surely obliged us to indulge feeding our bodies.

But many of us who also prefer to engage in political discussions and analyses of the latest, persistent and devastating aggressions of imperialism in the world, were drawn by the presentation titled “Resisting the Media Propaganda War” by Stephen Gowans, who provided plenty of food for thought.

Gowans is the Canadian author of two engaging books, “Washington’s Long War on Syria” [1] and “Patriots, Traitors and Empires: The Story of Korea’s Fight for Freedom”. [2]

The premise to his presentation turned our attention to the real geopolitical issue in question, US foreign policy as the great determinant of occupations, invasions, coups, hybrid wars and regime changes. No other country has enough power to dictate what the US deems vital to them. Indeed, Canadian foreign policy is not fully independent and can be seen usually just as a mirror image of US foreign policy, albeit with pretensions of a less aggressive kind.

Foreign policy in general is always a good starting point to understand not only what motivates a government’s actions towards other states, but also why some domestic decisions are made.

Take for instance the decision of the Canadian government to buy the Kinder Morgan pipeline with Canadians’ tax dollars in order to bypass the popular resistance to its development. Is this strictly domestic policy? Not really. International trade has always elements of foreign policy; often it is guided by it. Is it for Canada’s stated “national interest”? Try again. Whose interest? Kinder Morgan is based in Texas. And it is well known that election campaigns are financed by powerful multi-national corporations that expect huge profits in return. [3]

Gowans put it quite bluntly, “US foreign policy has nothing to do with higher social values. It has no interest about people.” This is quite evident in different parts of the world. In the Middle East there are abundant examples.

The invasion and current occupation of Iraq is still an open chapter of US intervention with no end in sight. Gowans reminded us of the callous reaction of former US Secretary of State Madeleine Albright to the deaths of 500,000 Iraqi children as a result of sanctions: “We think the price was worth it.” The 7-year-old war on Syria with the determination to overthrow the legitimate government of President Bashar al-Assad by supporting terrorist groups is an immoral low-handed US tactic that shows no respect for international law at the cost human lives. The threats and additional role of Israel on Iran cannot be ignored, and all the while the US logistically supports Saudi-Arabia’s war on Yemen. Airstrikes by the Saudi-led coalition have killed more than 4,000 civilians in Yemen, according to U.N. estimates.

Similar scenarios of human suffering can be painted in Latin America, except for the military interventions, where Venezuela and Cuba receive the cruel impact of economic and financial blockades and devastating sanctions which are no less damaging. Paraphrasing Gowans, sanctions overall have killed more people than the nuclear bombs used by the US.

He illustrated his point by describing the US approach to China, Russia and the Democratic People’s Republic of Korea (DPRK). It is quite obvious to the political analyst that the US has escalated its level of political antagonism with China and Russia, while maintaining its aggressive stand against the DPRK.

The US often speaks of “concerns” about the international order, “threats” to its national security, and “humanitarian crisis”. However, Gowans affirmed credibly that those concerns are vaguely “self defined based on national interests”, and often used as cover up to justify a political and/or military intervention.

The economic growth of China is not a threat to the US national security. “China is a threat because it challenges US economic power. It threatens free market and free enterprise that are central to US principles.” We could add that China threatens the essence of US ideology.

On the other hand, Russia is also in the crosshairs of US foreign policy, but for a different reason. Russia has assumed a leading role in the Middle East, fighting terrorism and supporting Syria by doing so. Russia has been a successful stabilizing force in the region, asserting itself as a powerful player towards a multipolar world. That challenges the US definition of international order. That is, an order where the US has total control.

Both China and Russia are also seen as “threats” by the US because of their increasing economic presence in Latin America, in countries like Venezuela, the traditional US “backyard”. 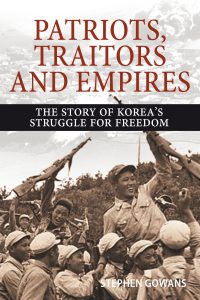 As for the DPRK, the long history of US disconnect with that country has less to do with the DPRK being a nuclear threat, and more to do with the threatening US presence in South Korea and the region. As Gowans says, “the US is a threat to the DPRK.” To learn more about Korea’s struggle for freedom we will have to read Gowans’ latest book.

Recapping to the title of his presentation, “Resisting the Media Propaganda War”, Stephen Gowans demonstrated that the most dangerous tool in the US war arsenal is the corporations and Wall Street controlled media. Therefore, we need to pay attention to the US empire and observe the actions, the contradictions and the double standards of its foreign policy as seen through independent media. Only then we will be prepared to resist the propaganda war. People’s Voice is such a media outlet, independent from corporate interests, “speaking out against imperialist wars since our first issue”, and resisting for the last 25 years.