Statement of the Central Executive Committee, Communist Party of Canada

As we celebrate and build the struggles of the working class around the world this May Day, the enemies of peace are busy organizing for war.

The list of countries under attack or facing increasingly bellicose threats by the United States and its NATO allies is growing. The last year has seen sweeping sanctions and destabilization attempts against the Bolivarian Revolution in Venezuela, US and Canadian backing for an ongoing soft-coup in Brazil, and an election stolen by the elite in Honduras.

In the Middle East, apartheid Israel has stepped up its war crimes against the people of Palestine, especially in Gaza where dozens of unarmed demonstrators have been assassinated by IDF snipers. The recent illegal missile strikes against Syria by the US, France and the UK seek to prolong and deepen the dirty war against Syria which has already cost the lives of over 500,000 people. Iran is facing deepening threats by the Trump administration, which is filled with war mongers with a long history of targeting the country.

The people of Korea, after more than six decades of war, occupation and division, have faced renewed attacks in the last year, including the threat of annihilation by the world’s largest nuclear power, the United States.

The Trudeau government has deepened the Harper era militarization and drive to war in Canada. In almost all of the conflicts around the world the Canadian government is contributing to US and NATO aggression. This is evident in the expansion of Canadian troop deployments in Ukraine, Iraq and Latvia. Most recently Canadian troops have been sent to Mali to aid in France’s imperialist efforts in West Africa.

The war propaganda from politicians and the corporate media is relentless. Cold War horror stories have been resuscitated as the war mongers spread fear and division to justify their aggression. A broad and massive anti-war movement must drown out the drums of war before it is too late.

Last year’s announcement that the Trudeau government intends on raising military expenditures by 70% over the next ten years shows that the government is doing everything it can to expand imperialist war and exploitation. The fight for an independent foreign policy of peace and disarmament is vital.

Unrestrained pillaging of the environment has meant the effects of climate change are starting to be felt around the globe. Hurricanes, flooding, droughts and wild fires have effected millions. Meanwhile the federal government loudly and proudly enforces the will of the oil and gas monopolies allowing for more environmental degradation and the flagrant violation of Indigenous sovereignty in Canada. This is being played out again with the federal governments current insistence that the Kinder Morgan pipeline be built in BC, despite massive opposition and the rights of Indigenous peoples.

Continued capitalist economic crisis has also expanded the drive to deepen exploitation. Their profits are made from growing poverty. As the global economy created a record number of billionaires last year, inequality has skyrocketed. The 8 richest people on earth now own as much wealth as 50% of the world’s population. This year the world’s 2,000 billionaires had their wealth grow by $762 billion, enough money to end extreme poverty seven times over.

Yet that is not enough for the capitalist class. Corporate greed in Canada has sought to deepen exploitation by fighting the raising of the minimum wage tooth and nail, gutting and raiding workers’ pensions, and continuing the privatization and austerity agenda. Signs of destitution and suffering can be seen everywhere, with the homelessness caused by the housing crisis, the opioid crisis increasing its death toll, and the suicide crisis of Indigenous youth on reserves.

The Trudeau government was elected in part because of its talk about addressing rising inequality, but there has been no “real change” to roll back corporate power. The NAFTA negotiations are an indication of this. NAFTA 2.0 will be another disaster for working people. This expansion of the corporate constitution of North America would give more rights to corporations to wreak havoc on Canadian jobs, manufacturing, the supply-management system in agriculture, on universal public Medicare and on labour and democratic rights. An alternative trade policy that promotes sovereignty and independence needs to be fought for. Canada needs international trade based on a system of mutually beneficial, multi-lateral, fair trade with countries around the world.

As anger grows towards declining living standards, the capitalist class is growing more violent and repressive. The most reactionary sections of capitalist classes around the world are growing stronger and seek to blame Muslims, women, Indigenous peoples, Black and racialized peoples, and queer and trans peoples. The rise of ultra-right and fascist organization and ideology in Canada and around the world seeks to rollback the hard fought gains of working and oppressed people and preserve the capitalist system.

Ultra-right governments have made major gains in Europe (Poland, Italy, Hungary, Ukraine) and in the United States with the Trump administration. In Canada the ultra-right is seeking to expand their close relations with the Conservative Party, as can be seen by Andrew Scheer’s connections to Rebel Media and Doug Ford’s Ontario links to anti-choice and ultra-right groups.

Mass action by working people is needed to isolate and rollback ultra-right and fascist forces. Broad alliances fighting for democracy and equality rights must be formed in opposition to racist, white supremacist and fascist organization and advocacy. Last year’s massive mobilizations after the attacks in Charlottesville demonstrate that it is possible.

The drive towards war, racism, climate chaos, poverty and precarity is by no means inevitable. The fight back of the #MeToo movement, the Women’s March, the struggle of Indigenous communities against the Trans Mountain pipeline, and the massive teachers’ strikes in the US South are just some of the current struggles that show the way.

Workers in Canada can show their solidarity and actively support workers struggles globally, standing shoulder to shoulder against the forces that are leading the world off a cliff.

Labour and its allies must unite and fight for a people’s agenda for Canada, organizing mass action for demands that can rollback corporate power and the drive to war. 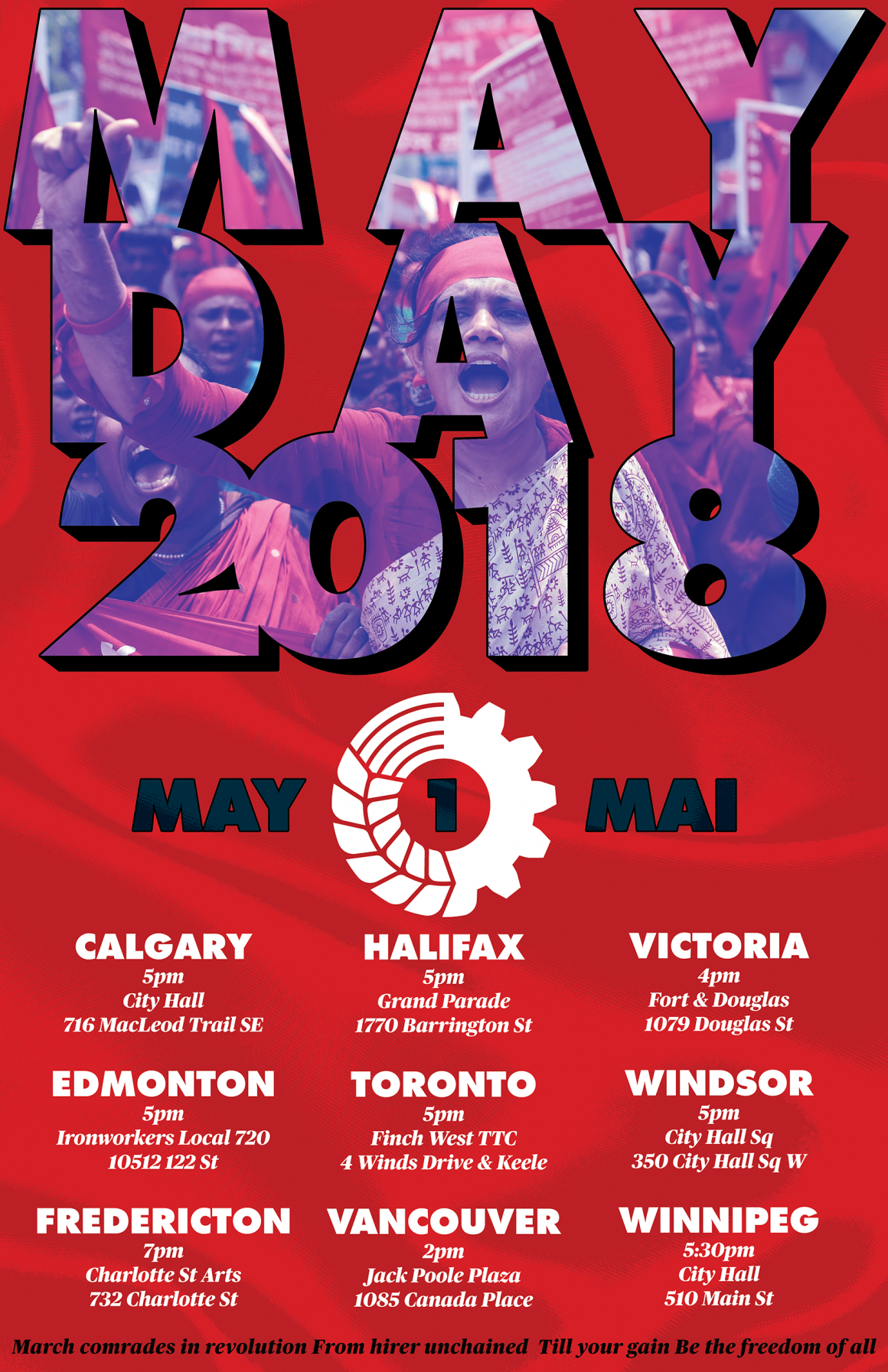 This May Day the Communist Party of Canada is fighting for:

Workers of the world unite!

This year marks the 200th anniversary of the birth of revolutionary Karl Marx. Marx’s foundational writings highlighted the necessity of socialism to overthrow the capitalist system in order to end exploitation and oppression and emancipate humanity. Working people will take control of their own destiny and establish working class political power in order to change the world. Another world is possible, and this May Day the struggle to win it continues.