The Bharatiya Janata Party (BJP), an off-shoot of the fascist-inspired Hindu paramilitary organization RSS (Rashtriya Swayamsevak Sangh), won a majority in India’s Parliament in 2014, and Narendra Modi, a former RSS volunteer took over as the 16th Prime Minister. That changed India’s political scenario from somewhat left to the extreme right. Hindutva (making India a Hindu nation) is the declared goal of RSS. While a number of steps have already been taken in that direction, the final push depends on a BJP victory in the 2019 federal poll. This seems unlikely, if the BJP”s declining popularity (according to political experts) is any indication. 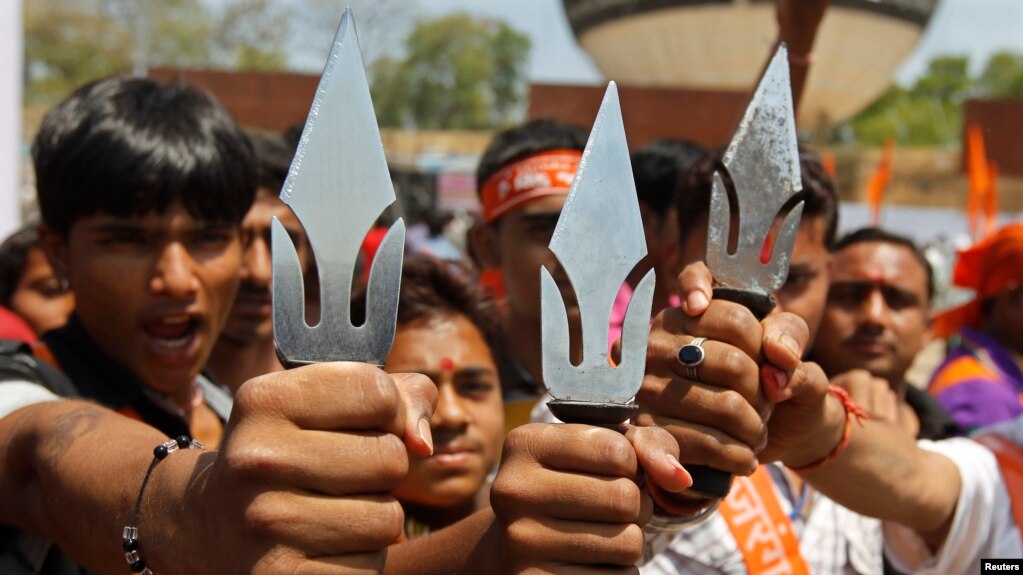 After Modi became PM, far right outfits known as the Saffron Brigade (saffron is the RSS flag colour) began working on the “Hindutva Task.”
A large number of roads, buildings, railway stations, airports and places of public interest were rechristened by federal and provincial BJP rulers. The name of the Taj Mahal, the famous tourist destination in India’s UP province, also came under the scanner. The saffron clad UP chief minister, Yogi Adityanath, had removed Taj from the UP tourism list, since Mughal Emperor Shah Jahan built it allegedly on the ruins of a temple. Later, he reportedly took a U-turn on the issue.

The cow was made an icon of Hindu religiosity, to isolate minorities and win Hindu votes. The RSS blamed Muslims and Christians for cow slaughter, and its mobs killed many upon rumours of eating beef and shipping meat. Their places of worship were pulled down and many left homes to save their lives. Dalits in Modi’s Gujarat Province were whipped for skinning the dead cows – their traditional job. Modi kept quiet, which fanatics took as consent for their actions. Minority communities were cut off from the mainstream, and the BJP‘s strategy to win votes clicked, at the cost of India’s communal harmony.

“Hindutva” was first floated by V.D. Savarkar in 1923. The British government arrested him for some revolutionary activities, but he was let off after assuring his loyalty to the Crown. The RSS pays tributes to him as Veer (Brave) Savarkar.

Following him, Dr. Keshav Baliram Hedgewar and Madhav Sadashiv Golwalkar, the founding fathers of RSS, said on record that India was a Hindu nation; other faiths were alien, and their believers could not claim similar civil rights, including that of citizenship.

In the first quarter of last century, when Indians, unmindful of their race, religion or region, stood as one nation against colonial rule, Hindu nationalists inspired by Hitler and Mussolini stood with British Imperialism. In order to wipe their slate clean, RSS ideologues in the 21st century are rewriting history. Curriculums in schools and at higher levels of education are being changed to present events through saffron glasses. The RSS admires a turncoat like Savarkar, but condemns Tipu Sultan, the Muslim ruler of Mysore who died fighting the British. BJP state rulers have deleted many names from the text books of state-run schools, including that of Jawaharlal Nehru, first PM of India. Hindutva fans ridicule Father of the Nation Mahatma Gandhi on social media, and eulogize his killer, Nathuram Godse.

Their stories never talk about the poor and oppressed Indian masses that fought two battles at the same time, one against the imperialists and the other against repression of feudal lords. Names and portraits of popular freedom fighters like Martyr Bhagat Singh, Subhash Chandra Bose and Sardar Patel are being used to cover up their past sins. Satyapal Singh, HRD federal minister of state, recently stated that Darwin’s theory of evolution is wrong and needed to be changed in school and college curricula. Such a thing, he said, is neither written in ancient books nor have our ancestors mentioned it. All they saw was men walking around and not an ape turning into a man.

Listen to something more interesting coming from His Master’s Voice. PM Modi, during his address to Mumbai Doctors Conference on ‘how to improve healthcare facilities in modern India’, also recalled scientific progress made in ancient India in fields like reproductive genetics, transplantation and plastic surgery etc. He quoted Mahabharata warrior Karna, who the epic says was not born from his mother’s womb, and referred to Hindu god Ganesha, who had an elephant head transplanted on a human body. Modi had earlier written about space travel and stem cell technology in ancient India, and that the Hindu God Rama flew the first airplane.

Modi speaks a lot and loud to sway his audience, and can tailor his speech to his listeners. Experience, however, tells that his deeds often belie words. His election pledge to get rid of corruption proved a joke afterwards. Stories of bigger scams involving Modi’s buddies and BJP President Amit Shah’s family have come to the fore. Growth hasn’t created any jobs, and millions of skilled, qualified and jobless youth who supported him earlier now feel cheated. Modi’s advice to sell pakodas (a deep fried Indian snack) has added insult to their injury.

Let us hope Modi and his colleagues stop the saffronisation of science and education. Let them focus on core issues like education, healthcare and agriculture and leave matters of faith to the people.