Last October 22nd, the 50,000 young people from over 180 countries who gathered at the 19th World Festival of Youth and Students put a final, successful mark to a challenging edition of the biggest anti-imperialist youth event in the world. For over a week, the Sochi Olympic village was turned into a massive forum where young people took part in political debates, seminars, meetings, conferences, sportive and cultural activities. The mobilisation of the Russian people and youth was remarkable: with 5000 volunteers and with opening and closing ceremonies of Olympic calibre, it was clear that Russia was ready to greet and host the youth of the world. 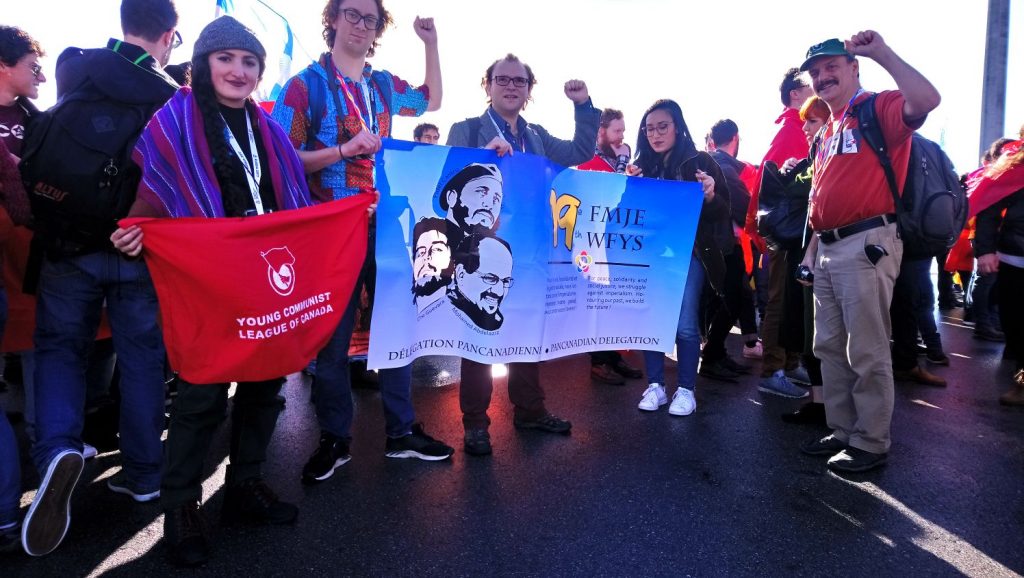 However, as the President of the World Federation of Democratic Youth (WFDY), Nikolas Papadimitriou, outlined in his closing remarks, “the success of the 19th World Festival of Youth and Students was a challenge for the World Federation of Democratic Youth. This success is not reflected only by numbers and facts. It is reflected with the messages that the youth will carry from Russia and from the Festival to their homelands; messages of peace, solidarity and anti-imperialism.”

Indeed, WFDY and the International Organising Committee, as well as the National Preparatory Committees, encountered difficulties due to unilateral actions taken by the Russian authorities, that were in contradiction with the different collective decisions made during the preparatory pro- cess of the Festival. These included the invitation of international participants without consulting with the National Preparatory Committees (who are the bodies responsible for the mobilisation to the Festival in each country), several attempts to depoliticise the event as well as deliberate efforts to isolate WFDY, the main organiser of the event, from the rest of the Festival. All of these actions were publicly denounced by WFDY, who issued three statements regarding this problematic situation.

Despite these difficulties, thousands of young people who mobilised through the World Federation of Democratic Youth made the Festival’s slogan resonate in Sochi: “For peace, solidarity and social justice, we struggle against imperialism – honouring our past, we build the future!” They sent a clear message of resistance against imperialism, honouring the 70-year tradition of the Festival movement, and continuing its anti-imperialist character. Over the past 70 years, the Festival has become the world’s biggest gathering of youth in struggle, and a bastion of anti-colonialism, anti- fascism and anti-imperialism. It has strengthened the youth in its fight-back against its main enemy, imperialism. The Festival represents 70 years of struggle, that continues to inspire our mobilizations today and will help us build our future, a future without exploitation and war.

Strong and united, WFDY and its member organisations stood together in order to show the presence of anti-imperialist forces in the Festival and to promote, as much as possible, the official discussion programme approved during the 3rd International Preparatory Meeting.

In doing so, we honoured the legacy of three anti-imperialist figures who dedicated their lives to the struggle against imperialism. Saluting Mohamed Abdelaziz, we stood in solidarity with the people and the youth of Western Sahara, Africa’s last colony, who has been fighting occupation by Morocco since 1976. Honouring Che Guevara, 50 years after his assassination, and Fidel Castro, we paid tribute to two freedom fighters that liberated Cuba, and made the Caribbean island into the “first free territory of the Americas.” In a powerful moment of solidarity, delegates had the opportunity to attend a seminar on Che Guevara with his daughter Aleida, who emphasised the need to honour Che through our daily struggles. Indeed, honouring him along with Fidel was a tribute to their internationalist commitment, the Cuban Revolution, and its achievements in fighting on the side of the peoples against imperialism in Africa, Latin America and everywhere. 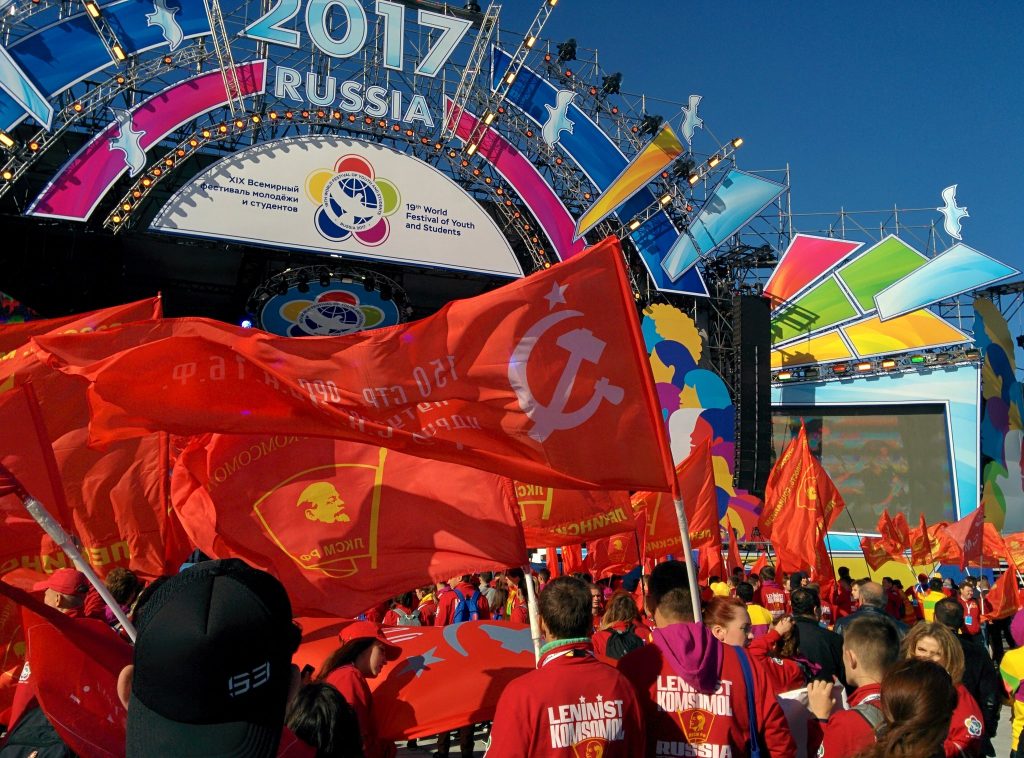 On the morning of October 16th, thousands of young people marched in the middle of the Olympic Village to honour the Great October Socialist Revolution. It was an event that showed the path of resistance of the peoples against capitalism, imperialism and colonialism, and for peace, social justice and revolutionary social transformation. We remembered the achievements of the Revolution, as well as the help and support the USSR provided to the anti-imperialist, anti-fascist and anti-colonialist forces in general, and to the youth of the world and the Festival movement since 1947.

At the conclusion of the march, representatives of the main international anti-imperialist organisations allied to WFDY, such as the World Peace Council, the World Federation of Trade Unions and the Women’s International Democratic Federation, addressed delegates. They expressed their solidarity and confidence in the struggling youth, asking them to keep up the guard during a period in which, as WIDF President Lorena Peña said, “imperial and androcentric forces, patriarchal, homophobic and sexist capitalism are harming the youth and women. Let’s celebrate the 100th Anniversary of the Great October Socialist Revolution as a preparation for current and future struggles!”

Honouring the October Revolution was part of the programme on many occasions. On October 18th, for example, 36 communist youth organisations including the YCL-LJC Canada attended a special seminar. They reiterated the need for the youth to fight for socialism and “continue in the way of the Red October,” 100 years after the first socialist revolution.

As the slogan outlines, “honouring our past we build the future.” Thus, the Festival was not only an occasion to celebrate a glorious past, but also to celebrate the ongoing anti-imperialist struggle of millions of young people across the world. 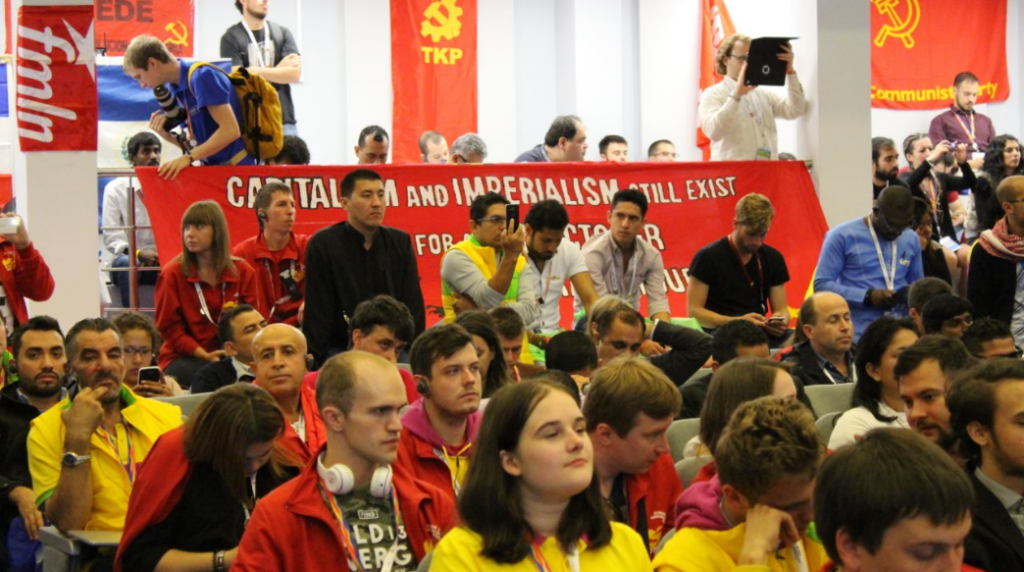 Throughout different activities, delegates were able to exchange with current, inspiring anti-imperialist figures, such as Oscar López Rivera (activist for the independence of Puerto Rico who served 35 years in prison before be- ing liberated last year), Fernando González (one of the Cuban 5) and Elián González. Participants attended conferences, panel discussions and seminars addressing the different problems confronting youth today. These included issues such as racism, the rise of the ultra-right, women’s rights and emancipation, the rise of militarism and the danger of globalised wars, the threat of regime change, environmental issues, neoliberalism, the need for free and quality public and education. Looking at these individual issues, delegates also discussed their overall relation with imperialism. 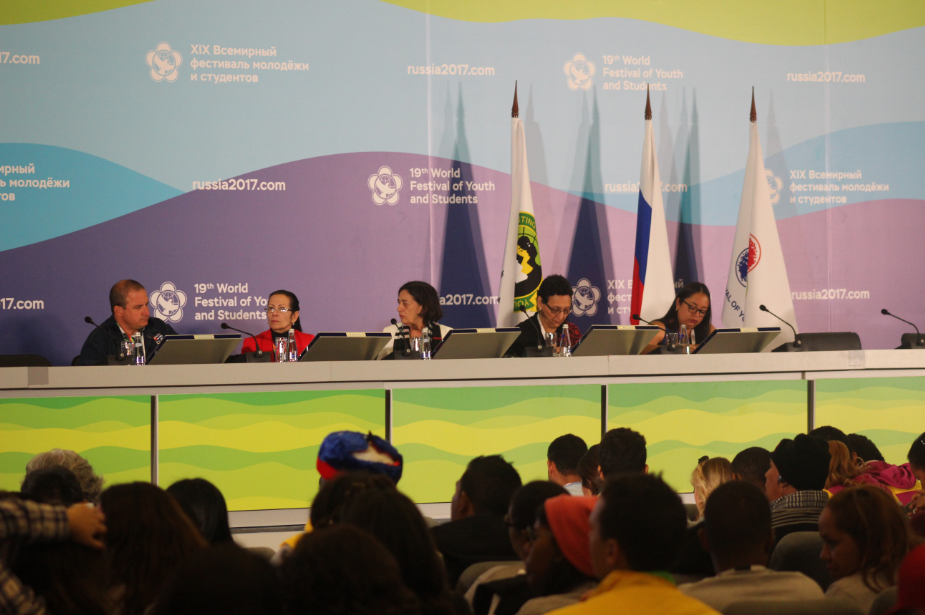 One of the core events at the Festival movement is the Anti-imperialist Tribunal. As heir to courts of conscience like the Russell Tribunal, which accused the crimes of US militaries in Viet-Nam, the Anti-imperialist Tribunal of the World Festival of Youth and Students is an occasion for young activists to prosecute imperialism’s crimes. Among the countries who submitted a case to the Tribunal were the youth from Cyprus, DPR Korea, Argentina, Puerto Rico, Palestine, Venezuela, Cuba, Eritrea and Western Sahara.

The Pan-Canadian delegation also presented a case against Canadian imperialism, both at home and internationally. Amongst the accusations presented to the court, the delegation denounced Canada’s mining corporations for their extractions in Latin America, Africa and elsewhere; Canada’s foreign policy that is increasingly bound to the NATO and US war agendas; and the ongoing genocide of Indigenous peoples in Canada, with particular reference to the case of missing and murdered Indigenous women.

In the end, the Tribunal, presided over by World Peace Council President Maria do Socorro Gomes, declared imperialism guilty of crimes against humanity. This was demonstrated through “aggressions, invasions and colonial occupation; neo-colonial wars, economic war, installation and proliferation of military bases to guarantee imperialist hegemony; genocide, crimes against humanity and gender-related crimes; actions against biodiversity and the appropriation of the natural resources, principally water; use of nuclear, chemical and biological weapons; and the overthrow and destabilization of democratic and legitimately constituted governments.” The final statement also called on the world’s peoples to “develop their active resistance and all the forms of struggle to reach the ideas of social justice, freedom, democracy, and the construction of a better world, socialism.” In addition to its contribution to the International anti-imperialist tribunal, the pan-Canadian delegation participated in a panel, denouncing NAFTA and the role of free trade agreements.

Together, we took the pledge, as mentioned in the Final Declaration of the 19th World Festival of Youth and Students, “to unite our voices and strengthen our common struggle to overthrow imperialism,” at a moment in which the aggressiveness of imperialism and capitalism are increasing every day, in which the danger of nuclear war is higher than it has been for over half a century, and in which US-NATO imperialism has waged a constant war against the peoples of the planet since 2001.

Together, the progressive youth of the world reaffirmed the importance and the pertinence of the Festival movement and the vanguard role played by the World Federation of Democratic Youth. They committed to “march forward with the ideals of the WFYS and to join hands to become the builders of the world of peace and solidarity, a world free from imperialism, of this global system of the domination of capital and the monopolies.”