As NAFTA negotiators from the U.S., Canada and Mexico gathered in Ottawa for a third round of talks, the Communist Party of Canada (CPC) held a press conference at the National Press Gallery on Parliament Hill on Sept. 21, and participated in the tri-lateral “Civil Society Summit” on Sept. 23.

Communist Party leader Elizabeth Rowley delivered the CPC’s demand that Canada immediately withdraw from NAFTA and NATO at a press conference in the Centre Block at Parliament Hill, accompanied by the Parti communiste du Québec’s Adrien Welsh. Rowley described NAFTA as “a continental corporate constitution” and said the “trade” deal “has always been about corporate globalization, and enabling US based, multi-national corporations to become more powerful than elected governments and public institutions.”

Pointing to the loss of half a million manufacturing jobs, and the 2012 forced relocation of the Caterpillar plant from Ontario to Indiana where workers are being paid half as much, Rowley said even more is now at stake. She stated that the re-negotiations “will not make a bad deal better, and they could easily make it worse for working people who will see their jobs disappear, their wages, pensions and living standards decline further, and their country more and more closely resemble the social, economic and political morass that is the U.S. today.”

The CPC linked the issue of NAFTA to the military pact of NATO and demanded withdrawal from both. Rowley cited Trump’s recent warmongering speech at the United Nations as “the evidence that proves Canada should not integrate economically, politically or militarily with the U.S. – the world’s most dangerous imperialist power and rogue state.”

The following day there was a rally and press conference at Parliament Hill organized by the Council of Canadians, Common Frontiers, the Trade Justice Network, Réseau québécois and the Canadian Labour Congress. Organizers read a declaration that was agreed upon by organizations from the three countries.

The statement states: “Since the implementation of NAFTA in 1994, it is the working people, communities and the environment in all three countries who have suffered, while wealthy investors, big corporations and their executives have reaped more profits and acquired more rights and power. That power has had a negative effect on our democracies.”

It called on governments to adopt a “new model of integration, cooperation and exchange among nations” that guarantees sovereignty and “respect for human, political, economic, social, cultural and environmental rights.”

The Communist Party of Canada was part of the rally with a “get out of NAFTA now” banner. A blimp was brought to the rally by the Council of Canadians and Leadnow which read: “NAFTA hijacks democracy; stop ISDS.” ISDS or Investor-State Dispute Settlement provisions are embedded in NAFTA. They give corporations the right to sue governments of another country if it introduces laws or policies that hurt corporate profits, no matter if they benefit environmental, health or human rights. For example, Lone Pine is suing the Quebec government for $250 million for its ban on fracking. The corporation claims Quebec has violated its “right” to frack. 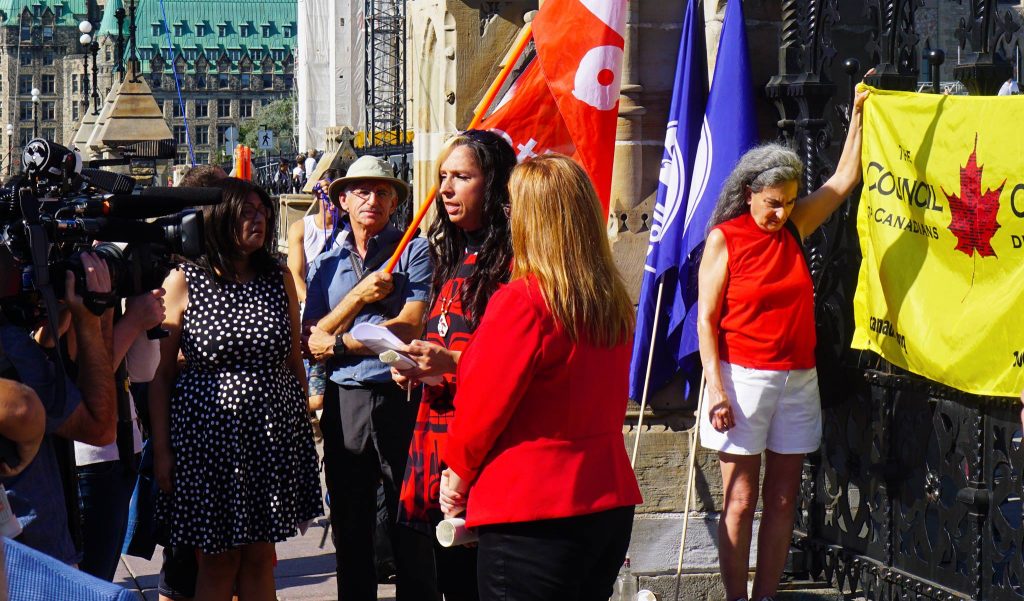 In the afternoon, the “Civil Society Summit” convened two panels for a detailed discussion about the issues surrounding the current re-negotiations. Highlights included the presentation of Indigenous author, lawyer and academic Pamela Palmater who is Mi’kmaq from the Eel River Bar First Nation. She presented a strong case against NAFTA, the TPP and CETA, saying that “trade” deals “are a matter of life and death for Indigenous peoples.” She pointed out that increased corporate power, especially in extractive industry, often means brutal violence against Indigenous women and girls in Canada and around the world.

Palmater said that the current negotiations which include limited consultation with the Assembly of First Nations leadership, in no way fulfill Canada’s supposed commitment to free, informed, prior consent of First Nations. The Trudeau government has said that it would like to see a chapter added to NAFTA that outlines Indigenous rights. However, this rings hollow since the Trudeau government has not said this potential chapter would trump the investment and energy chapters which clearly violate Indigenous rights to sovereignty and self-determination. 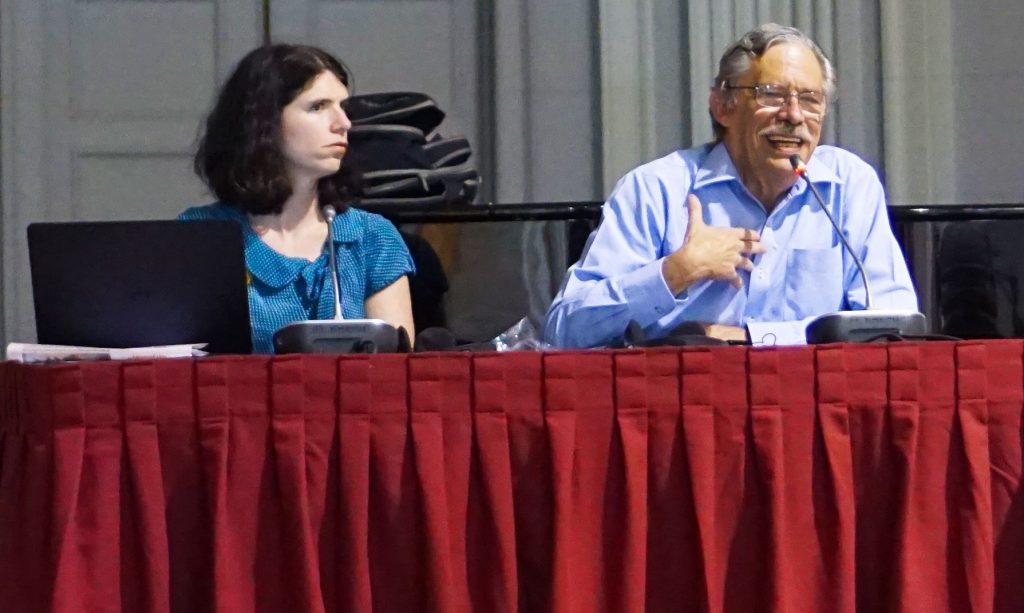 Panelist Alberto Arroyo from the Mexican Network of Action Against Free Trade stated firmly that “no matter how much we improve NAFTA, it is never going to stop violating human rights. It makes human rights something that can be bought and sold.” That is why the labour and peoples’ movements in Mexico are calling for Mexico’s complete withdrawal from NAFTA. 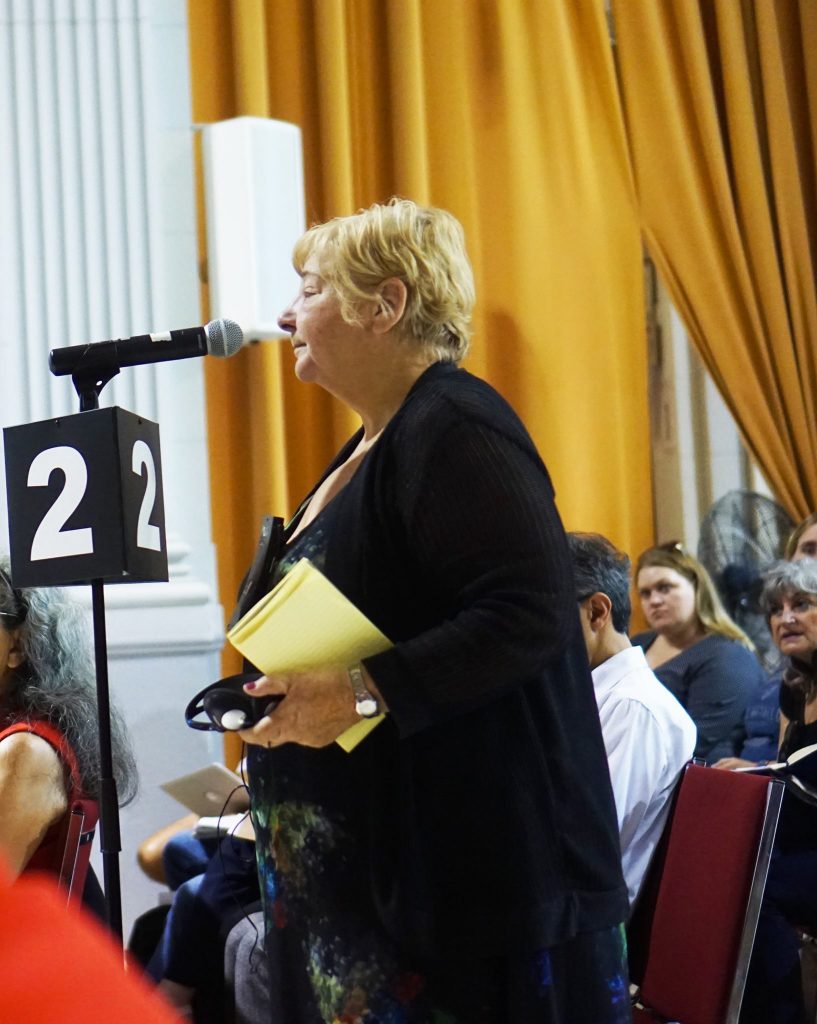 Elizabeth Rowley urged unity around a clear message to get out of NAFTA. She said that 23 years ago labour and democratic movements were clear in their opposition to NAFTA and that the current position that much of labour has adopted, including the CLC, seems to be that Canada should push for a more labour-friendly version of NAFTA. But this is a serious miscalculation of what NAFTA is. A “progressive NAFTA” is not possible because it has always been a project of multi-national corporations and their governments to override the sovereignty of the people of all three countries.

The Trudeau government claims it is pushing for a “progressive NAFTA,” with recent statements about wanting to include gender, Indigenous and labour rights. However it is certain that this is a smokescreen to hide the real nature of these re-negotiation talks: a further expansion of corporate power.

CPC Organizer Drew Garvie linked the rise of the far right with the economic and social conditions created by NAFTA and its built-in austerity policies. “This deal will drive down wages and living standards and open the door further to the ultra-right,” he said.