A message from Communist Party of BC leader George Gidora

Upon taking office, Christy Clark tried to distance herself from the legacy of Gordon Campbell, starting with a temporary reduction of his enormous tax breaks to the rich and the corporations, and the first minimum wage increase in over a decade. But the tax breaks were fully restored after Clark won the 2013 provincial election, and BC has again fallen near the bottom of provincial minimum wage rates. The Premier still refuses to increase taxes on higher income earners or corporate profits, and rejects wide public demands for a $15 minimum wage. Under her government, social cuts continue, living standards have declined, child poverty rates remain among the worst in Canada, rents have skyrocketed, and 150,000 people are officially unemployed (many more have dropped out of the labour force and aren’t counted). It took a Supreme Court of Canada ruling to force Clark to restore the Liberal cuts to education funding since 2002.

Until recently, the Premier received a $50,000 annual stipend (on top of her salary) from the proceeds of fundraising dinners attended by big corporate contributors. Her government gives full support to the big business drive for expanded extraction and export of natural resources, while ignoring inherent Indigenous rights and strong community opposition to dangerous projects like the Kinder Morgan pipeline expansion, the Site C dam which will flood valuable agricultural land in the Peace River, and the Ajax open-pit mine which threatens environmental disaster for Kamloops.

The verdict is clear: despite wearing a hard hat in her glitzy TV ads, BC’s Big Business Premier Christy Clark heads a government totally bought and paid for by corporate interests.

Since the 2013 election, a few mass struggles have forced the government to pull back for tactical reasons, and the NDP caucus in Victoria has raised some important criticisms about the anti-people and environmentally destructive policies of the Clark Liberals. NDP leader John Horgan has made a handful of progressive policy announcements, such as support for the campaigns to establish a $10/day child care system, and to legislate a $15 minimum wage.

But the NDP refuses to directly challenge the austerity policies of the Liberals, or even to roll back Campbell’s tax cuts. If anything, the NDP is yet again reaching out to big business, rather than mobilizing the working class and its allies around a platform of far-reaching economic and social reforms. As seen in the 2013 provincial election and the 2015 federal campaign, the underlying strategy is to present the NDP as the best managers of the capitalist system, “ready to govern” without rocking the boat.

In contrast, the Communist Party of BC gives full support to movements which defend the interests of working people, including for a higher minimum wage, a provincial child care program, truly affordable housing, and doubled social assistance and disability rates. We demand to restore the pre-2001 tax rates, and to block new oil pipelines, the Site C dam, and the Ajax mine. We urge voters to defeat the Liberals in this election, but the struggle for real change will continue after May 9th.

Communist candidates are campaigning on a platform to win fundamental reforms in British Columbia. A larger vote for Communist candidates will be an important signal that many working people are looking for radical change, not just capitalism with a different face. 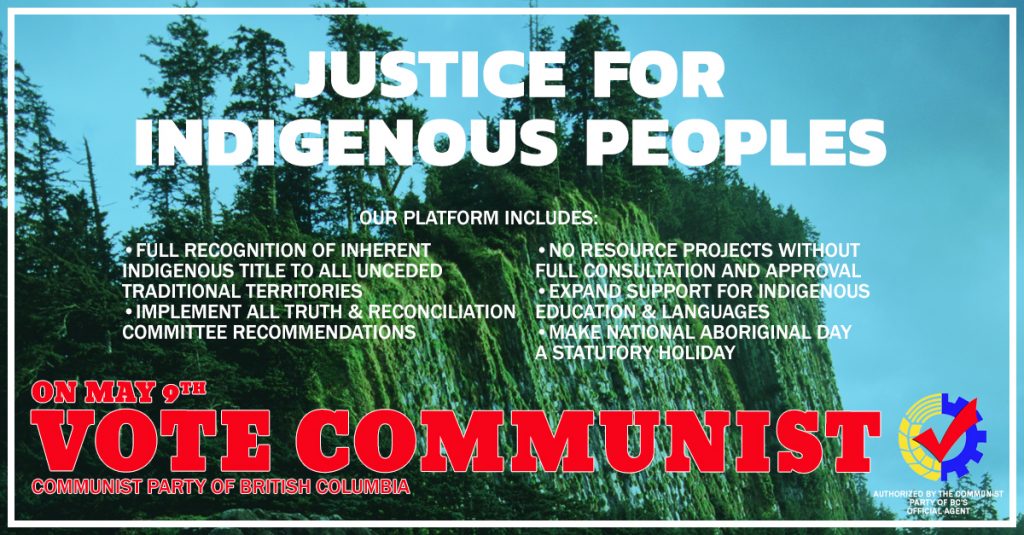