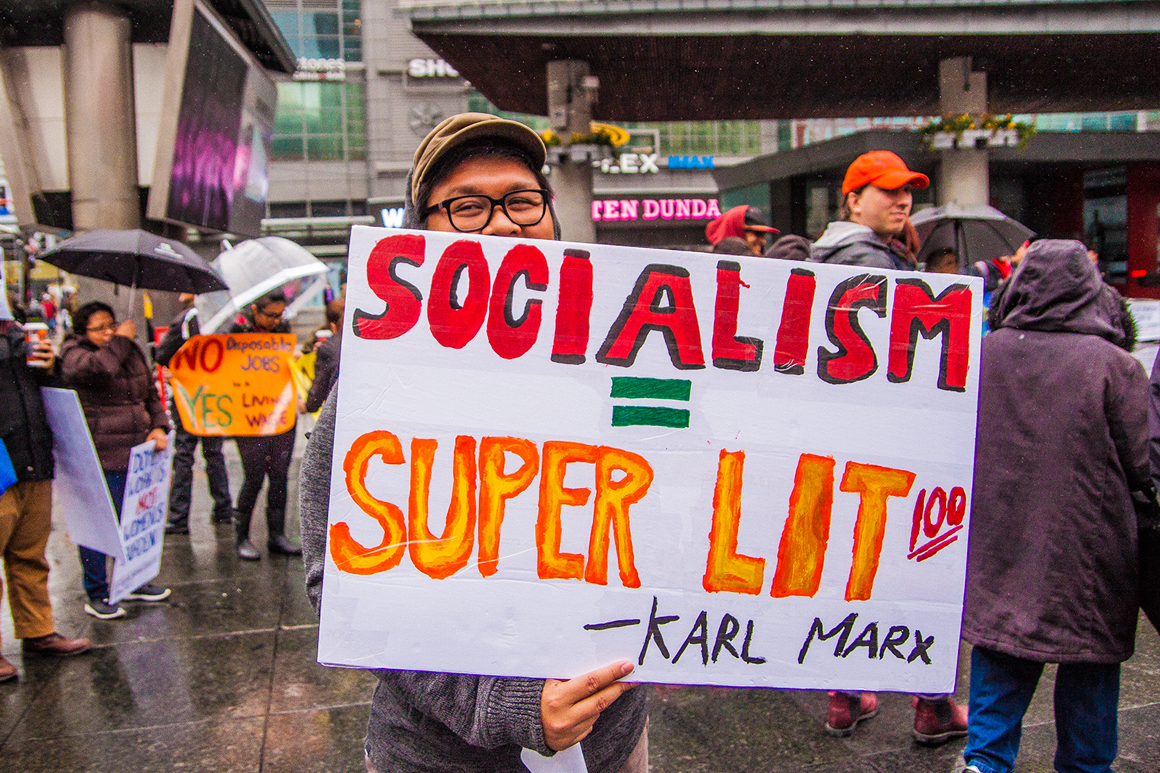 More than 90 countries across the globe saw mass rallies and other activities on Sunday, May 1, International Workers’ Day. The events celebrated gains for workers’ rights achieved over the past century, and demanded fair working conditions and wages today.

In Cuba, hundreds of thousands marched through Havana to a rally in Revolution Square, led by veterans of the 1961 literacy campaign.

Cuban Workers Confederation general secretary Ulises Guilarte said that an end to the 55-year US economic blockade of Cuba was a key condition of detente with Washington.

Flanked by President Raul Castro, Guilarte said Cuba would never waive its revolutionary and anti-imperialist ideals, a foreign policy committed to just causes, the defence of the country’s self-determination or its unconditional support for sister nations.

Demonstrators in Brazil rallied against that country’s right-wing forces, which are trying to undermine democracy, roll back wage increases and expand privatization.

“They want to privatize everything possible,” President Dilma Rousseff told a crowd of thousands at a rally in Sao Paulo. She emphasized that a legislative coup would be a huge step back for social justice and workers rights.

“They (the opposition) want to end social housing movements and grants that the government gives to families,” she added. “This is a blow against democracy and against the worker. The right-wing will deepen the crisis and to stain the Constitution.”

Rousseff announced a nine percent increase in spending for the family social welfare program, to help ensure wider access to education, food and health. She also spoke about plans to reduce the impact of income taxes on middle-income earners, and to build another 25,000 new low-price homes.

“This goes against what the opposition proposes,” she said. “They want to end this public spending that guarantees health care in the poorest sectors.”

In France, where worker protections are under threat, trade unions, students, pensioners and other activists held nearly 300 marches in Paris and cities around the country. The traditional May Day rallies took on greater weight this year as parliament debates a bill that would allow longer working hours and let companies lay workers off more easily. The bill has prompted the most militant labour-related protests in a decade, with marches and sit-ins frequently attacked by police.

Denmark’s three communist parties — DKP, KP and KPiD — united for May Day under the banner of opposing Danish involvement in the wars in Syria and Iraq. KP president Jorgen Petersen said the united action reflected a number of recent initiatives to bring the parties closer together, especially against the country’s support for imperialist wars.

Thousands of Turkish demonstrators rallied for May Day in an authorized area of Istanbul while police cracked down on other protests. Tear gas and water cannons were used against demonstrators trying to reach Taksim Square. One man died after being hit by a water cannon vehicle.

Taksim has symbolic meaning as the center of protests in which 34 people were killed on May Day in 1977. The governor of Istanbul said 24,500 security officers were on duty, and that 207 people were detained. Tensions are running high in Turkey after a string of deadly suicide bombings, mostly linked to Islamic State. In the capital, Ankara, police rounded up four suspected IS members who were allegedly planning to attack May Day demonstrators.

May Day marches were held elsewhere in Turkey, but were cancelled in the southern city of Gaziantep after a car bombing.

Tens of thousands of people marched across Moscow’s Red Square, carrying the Russian tricolor and balloons in the official government rally organized by President Vladimir Putin’s United Russia party. The rally avoided any criticism of the government for falling living standards. Communists and other left-wing Russian groups held their own May Day rallies.

Nzimande said the working class should close ranks behind the ANC to “defeat the strategic agenda of imperialism and monopoly capital” led by the liberal opposition and the corporate media.

May Day rallies were held across the Philippines, where political campaigning was entering the final week ahead of the May 9 presidential election. In Manila, riot police using shields and a water cannon tried to block about 2,000 left-wing protesters from getting near the U.S. Embassy. Union leaders said 20 demonstrators were injured, but some managed to break through the cordon, fighting back against police and using wooden poles to fend off fire trucks. Labour Party leader Jeremy Corbyn joined thousands of people at a May Day rally in central London, using the occasion to condemn the hate tactics of far-right groups throughout Europe.

Standing atop a red London bus, Corbyn said the Labour Party is united against the far-right and against racism.

“We stand in solidarity now against the growth of the far right in Europe,” said Corbyn, the first Labour leader to address a May Day crowd in decades.

In Taipei, Taiwan’s capital, labour unions took to the streets with a march to call on the government of outgoing President Ma Ying-jeou to reduce working hours and increase wages. Young Taiwanese have seen their wages stagnate, and good full-time jobs are harder to find as the island’s export-led economy slows down.

Chen Li-jen, a protester with the Taiwan Petroleum Workers Union, said that while companies were seeing their earnings per share grow every year, workers’ salaries were not rising in tandem.

“Hardworking laborers are being exploited by consortiums,” Chen said. “For the past decade, our basic salary has not made any progress. Laborers’ rights have always been neglected. This is why I hope to take advantage of the May Day protest and tell the government that we are determined to fight for our rights.”

In the U.S., hundreds of marchers in Los Angeles chanted slogans and carried signs on May Day, along with a piñata of racist Republican presidential candidate Donald Trump. The marchers took to the streets calling for immigrant and worker rights and decrying hateful presidential campaign rhetoric.

Rallies in cities across the country called for better wages for workers, an end to deportations, and support for President Obama’s plan to give work permits to immigrants whose children are American citizens.

In San Francisco, hundreds of marchers rallied at Fisherman’s Wharf for immigrant and workers’ rights and to demand justice for several men fatally shot by city police. Across the bay in Oakland, close to 1,000 people marched in the Fruitvale district to raise awareness for workers, housing and immigrant rights and denounce Trump.

Meanwhile social justice advocates in Durham, New Hampshire, made the rejection of racism, xenophobia and anti-Muslim sentiment the themes of their annual rally.

May Day demonstrations were held in at least a dozen Canadian cities.

The largest was in Montreal, where thousands marched through the streets of the Plateau Mont-Royal from Parc Lafontaine to Parc Jeanne Mance. Union members, students and health-care workers were among those who demonstrated to demand better pay and working conditions, and to oppose the Couillard government’s attacks on social programs and the public service. As in many other cities, the Montreal rally called on governments to increase the minimum wage to $15 an hour.

The Fédération des travailleurs et travailleuses du Québec (Quebec Federation of Labour) used the May Day demonstration to launch its $15-an-hour campaign, saying too many working Quebecers are having trouble paying their bills and buying enough food for their families.

“The buying power of low-wage workers is going down or stagnating every year,” said QFL President Daniel Boyer. “We need a minimum wage that will allow people to keep their heads above water. It doesn’t make sense that people who work full time have so little income.”

Québec Solidaire MNA Manon Massé said her party supports the campaign for a $15-per-hour minimum wage, saying too many workers have to rely on food banks to feed their families.

About 500 people joined the annual May Day march organized by the Vancouver and District Labour Council along Commercial Drive. The rally heard from BC Federation of Labour President Irene Lanzinger, and activists from indigenous and immigrant groups. Dozens of progressive groups, including the Communist Party, set up displays at the second annual May Day information fair initiated by Spartacus Books.

A May Day demonstration at Toronto’s Pearson International Airport drew attention to the rise of precarious employment. The protest closed down the Terminal 1 departures drop-off lane as workers presented the Greater Toronto Airports Authority with a list of demands, including a $15 minimum wage and an end to the practice of awarding contracts to different service providers every few years, which forces workers to re-apply for their jobs, often starting at the bottom of the pay scale.

“Precarious work is a growing cancer across this province that we have to stop,” Chris Buckley, head of the Ontario Federation of Labour, told the Toronto Star. “How do people survive when they’re sitting at home waiting for the phone to ring, wondering if they’re going to get any hours to work that week?”

Other May First events were organized in Victoria, Edmonton, Regina, Winnipeg, Halifax, Brampton, Hamilton and Ottawa.